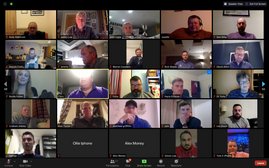 It was an AGM with a difference as CBH hosted an online meeting for the first time.

And all change on the captaincy front with a number of changes as plans and officials were confirmed for 2021.

First though, time to reflect on the anomaly of the 2020 season as President Jim Law highlighted the outstanding support of club members - both financially in committing to membership and through their behind the scenes support. Members continued to pay fees, sponsors committed and events such as Dave Killoran's lockdown quiz prospered and kept folks involved and enthused.

Jim bemoaned the fact that while so many functions and high profile events fell by the wayside, the ongoing commitment of the directors, Chairman Chris Fleet, Secretary John Legry and the management committee steered the Club through choppy financial waters ensuring that while it wasn't quite 'business as usual' the Club managed as best it could with some hugely enjoyable socialising when possible.

Plaudits too for Alex Kegg, ably assisted by Tom Evans in ensuring (at short notice) top class ground and playing facilities were available for not not only CBH, but Lancashire CCC too.

The support of volunteer coaches across the junior and ladies ranks was acknowledged and the patience and enthusisam of playing members accepting the difficult times, managing the situation and making the most of any opportunity.

Adam Roberts took over the bar management early in the year and had to adapt (and retreat!) quickly as circumstances continually changed. He's established a first rate bar function and the Club looks forward to him being able to move things forward.

Alan Turner's Century Club had missed out on a milestone birthday - but is set to bounce back next year - and Brian Gresty's long standing support was acknowledged in the year he stepped down as a club director.

On the field success was recognised with Ian Thistlewood's 4th XI, winning their division.

Chris Fleet further thanked the outgoing captains of the 1st and 2nd XIs (Rick Moore and Dan Riley) for their considerable input and highlighted some exciting ground developments that will see an extension to the 'tented area' during the winter.

Chris then focussed on the 'arrangement' with Lancashire that had been so successful across the summer and confirmed that further support is to be provided in 2021.

He also revealed a new role for Lee Dixon who will work lead senior selection as well as working on a number of projects behind the scenes. This includes the procurement of a new kit supplier - Icon Sports. Players will also receive a shirt as part of their membership package and a specific club number. Work has gone on behind the scenes to realign the financial processes to support this.

Coaching support is also to be offered by Robin Fisher and Alex Kegg (bowling) and Graham Money and Jim Gillson (batting).

The Ron Fleet Clubman of the Year Award has had some illustrious winners in the past and Chris was proud to present this years' award to Simon Law in honour of his June walk which raised more than £8,000 for the Club.

The formal part of the evening saw Chris Fleet reinstated as Cricket Club Chairman (and Club Captain) along with John Legry as secretary and Robin Fisher as Junior Chairman.

Present captains and the junior chairman joined in acknowledging the past year and raising a virtual glass to 2021.