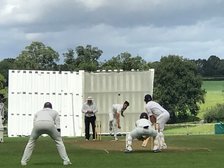 A roll in the Park

Not many people saw this coming - either before the game or once Chester had won the toss and chosen to bowl on a damp pitch.

A short delay meant a reduction from 50 to 45 overs as Rick Moore opted to bowl first to nobody's surprise. The absent Warren Goodwin and Harry Killoran meant Ollie Law and Charlie Fleet returned

The general feeling was a score of around 150 would prove challenging and it was mainly due to the attacking 'Park skipper that the home side posted a decent 144.

Ex-Chester batsman Michael Robinson and Danny Leech put on an opening partnership of 20 and wickets then fell regularly with only Robinson (12) and skipper Martyn East (60) in double figures. That extras (including five for the ball hitting a helmet) were second highest score with 35 of a 144 total highlighted the general sloppiness in the field for Chester - such a contrast to the slickness displayed at Neston a week earlier.

A slow soft pitch aided Alex Money's 4-24 and there were two wickets for Fleet and George McCormick.

The chase was never going to be easy but Chester then pressed the self distruct button spectacularly. Matt Jones went in the first over to be followed shortly afterwards when Ollie Law was run out as Money chased for a non-existent single.

With Money falling straight after, the large Chester contingent were scratching their heads trying to remember the last time they'd seen their side 3-3.

Meantime, the impressive Ben Gibbon was enjoying himself, ending with 2-19 from seven overs while East proved his all-round abilities with 3-24 and there were two wickets for Harry Newton.

The Chester procession from wicket to pavilion continued apace, Andy Metcalf managing a swashbuckling 21 and Moore 13.

Fortunately there haven't been too many Chester performances as poor as this in recent times but much credit also to a sparkling Oulton Park display.

With eight points at stake for the game, Chester slip to third in the table behind 'Park and Neston. Next week sees a trip to Nantwich.