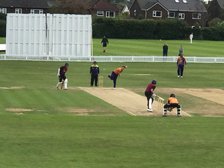 It feels like the end of season can't come quickly enough for the Chester 1st XI as they slipped to T20 defeat in both games with Oxton.

The first, batting second, saw Rick Moore's side go down by 84 runs, the most they've ever lost by in this format. It's difficult to identify with the side that crushed Neston so convincingly three times in six days just three short weeks ago.

Oxton put together a tidy 164-7 (Jonny Crick 34, Jarryd Basson 33, Jack Smith 27) with two wickets each for Alex Money, Matt Jones and George McCormick. One too for Lee Dixon, turning his arm over for the first time this season.

But again Chester couldn't get it together with the bat, finding themselves at 8-3. In the end their 80 total saw just Money, Metcalf and Dixon in double figures.

Second time round brought a closer game with Chester's 104-5 from a reduced 16 overs including 27 from Warren Goodwin and 21 from Rick Moore. The reply saw Smith (44) again take control and Henry Dobson hit 26 with Goodwin taking 2-10 in a win that went down to the wire and saw the home side fight back well.

Chester entertain Widnes at home in the last game of the season.