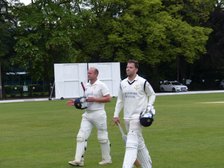 Difficult day at Didsbury as Metcalf makes sure of the win.

It was only right to win on the day we lost Alan.

Alan Middleton: Brummie, clubman of the year, umpire and our friend. Having umpired the under 18s on Friday at the club, Alan was clapped off the field by the lads who respected and appreciated him in equal measure. He never made it to Didsbury but he would have gone to bed looking forward to it. We as cricketers appreciate umpires and scorers no end and we will miss his enthusiasm for the game and his stories of days gone by. We will miss his cheekily scathing appraisals of our frequently sub-standard performances and I will miss buying him a pint after the game and him quietly telling me how well he thought we actually played.

To the game. Didsbury is a beautiful looking ground nowadays and usually the scene of excting matches. Last year Brayno and Fish won it with an excellent 9th wicket partnership. Under the circumstances, this was a must win game. After a minutes silence the game began and Brayno and Wiggy started things with Dan having won the toss and put Didsbury in. Both bowlers found movement and troubled the openers but it was evident that runs would come easy from poor bowling: very fast outfielder made sure of that.
Wiggy struck first with a gloved catch to Tom Wyatt then Brayno got rid of the talented Bazil Sultan caught Noah who had already stated that he should be in slips as "I can catch!"...true so far. Wiggy then removed Shabaz to Tom Wyatt again. Sam replaced Brayno - who'd bowled beautifully - and he hit his straps. He's an excellent bowler is Sam and he had the bit between his teeth. Wyatt up to the stumps and runs hard to come by. Wiggy replaced by Dan who unusually came round the wicket but it worked with Fisher out (for the second time having smashed Brayno to Tom) and the door looked open for an early tea. Sam took three wickets in his ten over spell with an excellent catch from Rob Fisher at slip accounting for one, Tom Wyatt another and an LBW. Super spell and good signs for the rest of the season. The batting seemed to falter from this point but in fairness to Didsbury, they stayed in and were tough to remove. Despite being seemingly clueless against the skipper who was swinging it in or getting in to bounce off the seem. Eventually in the 48th over, Fishy bowled Khan and ended the resistance on 150. Sam and Dan 3 each and 6 for 60 from 25 overs between them - go the baldies! Wiggy and Brayno bowled really well at the top of the order too and it was great to have Fishy bowling (and catching) again!
Tea was subdued but the belief was there to knock off the runs. Luke and Dil are a formidable pair at the top and now both have 170 runs for the season. Dil found the fence early and regularly, smiting it through and over cover regularly. Luke looked booked in for bed and breakfast and then Dil (20) played one shot too many and was controversially claimed caught out by Sultan. Noah came and looked positive once more but he was caught behind for 12 having seemingly looked untroubled. Last week's batting star, Tom Wyatt in but he was removed in single figures as was brother Reg, both by Mian. Andy Metcalf played his usual role of aggressor until Luke (37) perished LBW sweeping. Wiggy joined Metcalf and they ticked the score on and then Wiggy and straight away Dan were out. Nervous times but Metcalf looked solid. His striking is clean and with long levers and steady feet, he can find the boundary. However the best thing about his innings was his determination not to get out and the way he took responsibility to win the game was excellent - it showed real maturity and was a lesson in how to play a gritty game defining knock. Together with Brayno (9) 35 runs were added until Laker returned and bowled Brayno with a yorker with the score on 148. Sam held firm and nudged a single allowing Leachy to power away a four and finish 47 not out. Top batting and further proof that this is a side full of match winners with bat and ball.
Fittingly the game finished with a win and 25 points. Fittingly it was made far more challenging than it needed to be and Alan would have harangued and criticised the batting before quietly telling me in the bar how well Sam had bowled and Luke and Sam had batted.