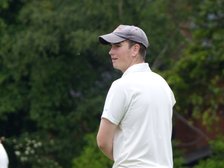 Hyde dismissed for 84 as Reg takes 6. Noah and Metcalf seal the deal.

September seems always to be sunny but on the top of Werneth Low it was more than a little damp. The start was delayed to give extra time for the pitch to dry off and eventually the game got going. Hyde decided to bat knowing they were guaranteed 7 points regardless with the game reduced to 80 overs a side. At the business end of the season and with Oulton Park ahead before the start courtesy of Grappenhall's concession, the stakes seemed a little higher but spirits high and bowlers ready; Brayno perhaps a little less fresh than usual.
Alex Townend and Matty Brayne opened up with the new ball and it moved off the pitch. They didn't bowl badly but their lines could have been more accurate and lengths more consistent. In fairness, Brayno could have used a bit of luck as edges flew over slip or bounced in front and the varnish of the stumps was challenged more than once. Brayno eventually removed Baker caught at slip and then the skipper replaced him and Reg replaced Wiggy.
At this point, the score was 44 for 1. Reg then bowled the kind of spell that doesn't come along too often. He took a wicket first ball and created a revolving door effect on the Hyde dressing room as he removed batter after batter all excellently caught: mostly in front of the bat as Dan 2, Pondy, Dil and Spavo gobbled up the chances. It was excellent, uncomplicated bowling in to a tricky pitch at the stumps which meant the Hyde batters had to play. Ben Turner had landed at Manchester at 12, come straight to the ground, donned his whites, stuck on the pads and then chipped one up to get out for a duck! He would surely have taken the seventh were he not limited to 7 overs. Marvellous figures of 7 overs 3 Maidens 6 for 16. Outstanding and fully deserved, following his two finals day triumphs it's been a great couple of weeks for Reg.
By the time Reg had finished his demolition job, the score was 58 for 9 and Dan had a strangle hold at one end - 2 for 5 off 10 overs. The last pair batted sensibly. They blocked. They ran hard and they made the bowlers work. Brayno returned - still a little green around the gills - and gave nothing away before Robin Fisher rounded off proceedings bowling Chewy. 84 all out.
Tea at Hyde is a wonder. Always marvellous, never the same and the bowlers in particular filled their boots! A low total is always a tricky chase but it seemed positivity was the best way to go rather than eeking things out in singles. Spavo and Nashy opened and both hit early boundaries. Spavo looked, as he always does, completely at ease and he drove positively and watched the ball until he ran one off his edge to give the most straight forward of chances to slip and out for 14. Nashy (10) too was positive and in fairness got a good nut which nipped back and clipped the top of off stump. 26 for 2.
Noah Vickery and Andy Metcalf came together. Noah asking for 'middle cake' as a guard but looking calm and composed. Metcalf busy as always until his first boundary calmed him down. The bowling was straight and pitch continued to misbehave but the outcome was never really in doubt as they knocked off the runs in 14 overs. In the end they had a "Who can hit the biggest 6?" competition which went to deadlock but Noah possibly won!? Superb batting. 50 run partnership and game over. Metcalf 37* off 20 and Noah 17*. Back to the summit and 14 points ahead of Oulton Park before next Saturday's winner takes all game at Little Budworth.