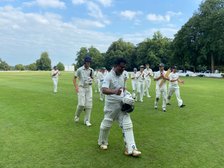 Toft. Synonymous with high scores and innings of substance. Many a bowler left quivering at the thought of plying their (usually reliable) trade there. The 2s lost the toss and took to the field with containment the aim of the game. Staniforth and Hughes in the top 3 and Nige Muirhead and skipper Paul Ashley lower down: work to do.
The quicker bowlers did the job early on and despite a blip from Ed Owen who ushered in the ball to land rather than catching the bl*$dy thing, the run rate went steadily down. Ed and Noah in particular doing the job. Two smart run outs form Noah and Spavo removed the openers but with Hughes there - in black plimsols - a large score seemed probable. Dan and Fishy took centre stage and tore out the middle order including combining to remove Hughes with Fish the catcher at mid-wicket. Brayno returned and blew away the last 3 to finish with 3 for 19 which was excellent. Toft 122 all out. Below par surely...but last week.
Luke and Griff came and went allowing Dil to join Noah. Both quality operators and coolness personified. Noah has a certain swagger which matches his play and Dil; he's just calm. They blocked - novel idea in modern cricket - and it worked allowing them to stay in and ultimately cash in. The pair added 40. Noah playing some glorious drives, sent scorching over the lush outfield and in to the fence. Then Nigel Muirhead arrived. Noah (20) departed LBW.
Dil still looking cool and the only man on a Northern English cricket field not swamped with sweat, he was intent on finishing the job. Reg and Spavo left the scene early both disappointed then Joe Killoran came to the crease. Talented lad is Joe. There were no byes once again to go with two super grabs off Brayno and a stumping too. He blocked his first 23 deliveries - stat courtesy of expert scorers Archie and Liam. Another 40 partnership and the game done. Joe had batted sensibly for his 19 but was out leaving a straight one to release the promoted Brayno to finish things. Dil's 52 not out the stellar performance on a roaster of a Cheshire afternoon. 4 more points and some Toft (socially distanced) hospitality thereafter. It's days like these that made us miss cricket so very much during 'Lockdown'.

MotM - Dilruk for his masterclass in patient batting.
DotD - Griff...for misdemeanours of the umpiring variety.