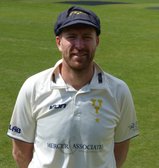 Dan and Kam with the bulk of the wickets before Joe Killoran and Modge make short work of the total.

"Sale away, Sale away, Sale away..." rang out on repeat in the changing rooms throughout the day. The old ones are the best etc. It's been a while since Sale were in the 2s Premier League and it was a great place to return to, not just because of the result but a new pavilion and much improved playing area too. The revolving door that the team has been in recent weeks continued with Spavo, Luke, Modge and Jack McGovern in.
Chester bowling in blustery conditions and Wiggy and Brayno bowled well. The wickets column didn't reflect it but they were both sharp enough that the ball flew away when it hit the bat. Wicket keepers...like busses, loads then none. So we twisted Joe's arm and hoped for the best but 24 byes came early on and so Dan had to slow things down. The beauty of playing new teams is that the opposition don't always know what our player's strengths are. The skipper duly got a wicket first ball with a big in swinger which trapped Coombs LBW. Kam was on at the other end looking good and he started on the wicket trail too with only one beamer!. He has a fantastic habit of taking wickets and despite going for a few, he helped to change the game from 66 for 0 to 104 for 4. Fishy replaced Kam (3 for 31) and he and Dan went through the rest of the order. Some strong shots down the ground saw Sale muster a below par 164 in 40 overs. Dan's 5 for 41 the standout on what was a good pitch for batting. Massive thanks to Andy Brayne for fielding for 25 overs in place of the late Luke Ramsay: the best ever fielding performance from a man in boat shoes! Much appreciated and very good.
With some heavy showers lurking in the distance and a groundsman unwilling to cover the day's wicket with a Lancashie 2s game on the horizon, the runs needed rattling off. Matty Brayne succumbed LBW for 14 early having been shoved back to the top of the order in place of Luke who was unable to bat due to late arrival. Joe entered the fray, on minus 24 due to the byes, looking to establish himself. Modge at the other end looking as solid as ever but not ticking the runs off as quickly as the captain wanted. One heavy shower sped overhead but nothing to stop the game. Sale rotated their bowlers - mainly spinners - and Joe smacked anything errant to the fence. He may have had his bat stolen but the replacement certainly worked as he struck 14 4s and 2 6s in his run a ball 87 not out (net 63) thus winning the game. A big 6 to clinch it - well batted. Modge 61 not out from 131 balls not his t20 game but effective nonetheless. Another 100 plus batting partnership to boot and 25 points.

MotM - Dan Riley whose 5 wickets broke the back of the Sale order.
DotD - Brayno for not working out why we sang the Enya tune over and over.