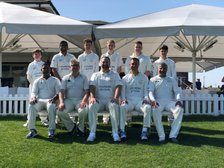 The 4's travelled to the back pitch at Port Sunlight on an overcast day, fortunate to get a game at all as the forecasted rain had come early overnight. But a damp track and thick carpet of grass on the outfield meant skipper Thistlewood was quick to shout 'we'll have a bowl' as the coin landed in his favour. This was a toss to win. Grounds up and down the country have been jolted into action by the swift resumption of cricket and having a cut strip and field to play on is good enough for now - it tests the batters and bowlers in equal measure.

The 4's fielding and bowling display was outstanding. Jack McGovern pounded in, creating a crater on the popping crease, and together with Alex Cotton restricted the scoring rate to under 2 an over. In win lose cricket it can often be the first 10 overs that determine the result: pressure piles on incoming batsmen, wickets tumble, a defend-able total creeps away. And so it proved. The opening pair of McGovern and Cotton had applied so much pressure that when the bowling change came wickets began to tumble as the PS batsmen tried to up the rate. Chris Bell struck first with, let's be honest, a pie and the Dave Henson in his first outing of the season hit his straps straight away. With line, a very good length, and a helpful pitch Dave ripped through PS's middle order finishing with 5 for 14 from his 10 overs. Chris Bell at the other end kept it tight, picking up 3-19 from his 10 overs. The catching was outstanding - not a single catch went down, and they were made to look easy when they weren't. PS were bowled out in the 40th over for 86. The one blemish was that 18 of these runs came from extras - 21% of the total to come from extras needs improvement as one day this will be the difference.

86 on this track and this outfield was a far from easy target, and patience was key. A few early wickets and it would have been game on. Fortunately Rob Williams has a calm head and the patience of Dr Fauci, and he together with young Joe O'Brien watchfully ticked off the runs. Joe in particular deserves credit - he left well, was patient when strong shots went for 1 and not a boundary, and did exactly as his captain asked - stayed in, enjoyed himself, demonstrated maturity. Carrying his bat for 21* was a great achievement in the circumstances, and was comfortably worth a half century on a quicker outfield. At the other end Rob put on a masterclass - he left everything not in his hitting area, ground the bowlers down, and soon enough he was whipping shots off his legs. The target inched closer, then raced closer as Rob passed his 50, finishing on 56*. Both batsmen rode their luck and were the beneficiaries of several dropped catches, and in truth this is what separated the sides, the story not told by the scorebook.

But let's be honest: the story is that we are there at all, playing sport, socialising with others, not staring at the four walls of our own houses. The silent WhatsApp group springing back to life with its Saturday mix of banality and celebration as scores are shared, bois bouyed, lerds laugh, and messages of congratulations bounce between the two sides. Another inch on the road back to normality.