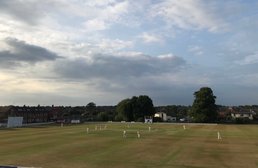 Blazers off to a winning start

With a wash out taking care of the opening game of the season, the Blazers welcomed the sunshine to Filkins Lane and a slightly depleted Caldy side. The home side also struggled to field 11 this week due to some very important business being attended to North of the border (massive fine).

Having lost the toss (standard), skipper Atko's Blazers were invited to field and as usual R. Fisher opened up from the Fleet Towers end. Somewhat unusually, he struggled to find his line and length, but mid way through his 4th over had warmed up sufficiently to sneak a wicket (bowled) and finished with 1-21 from his 4. After a couple from Atko, Mark Chapman took over and bowled decent lengths. Anything wide was dispatched but having been hit for a couple, he struck back with a canny slower ball, "I did him with the lack of flight", and finished with 1-27. Dil was brought on and despite taking 2 wickets with the last 2 balls of his second over, refused to bowl another one. "I'd rather bat 3" he said. Gillson on with his wily floaters and struck immediately... Milky on at the other end no thanks to Dil and after a couple of looseners, bowled a variety of full and straight deliveries resulting in 2 x stone wall LBWs. With the last ball of his 2nd over, he snaffled a brilliant caught and bowled low down to his left, much to the shock of everyone, including himself. Chris Jordan-esque (catch and bowling). Caldy finished on 70 from 15 overs, Milky's 3-1 being the obvious highlight.

Raj and Karlos opening up and Raj immediately into his stride with some lusty blows but caught and bowled for 9, bringing Mark 'Le Fox' Fearnall to the crease (promoted to 3 on account of Dil's hat-trick refusal). Foxy played an assortment of late cuts and a mighty blow into the leg side but was caught for 10. In went Mike Cook, now retired (our only pensioner) and looked more sprightly than any of us. A very energetic performance in the field was backed up with quick running between the wickets and some lovely shots. Meanwhile Karl was accumulating nicely at the other end, eventually falling for 23. Cooky also went for 17 which brought in Jim Gillson and Dil to finish things off. 73-4 in the 12th, job done and an early finish.

Afterwards we dined on a lovely curry, masses of cheese and a cheeky Port (thank you Karl). Fines were good, led by the ever-observant PC Fisher and his band of snitches.