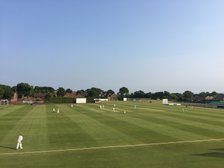 A steady chase for the Blazers on the road

A pleasant evening met the Blazers as they travelled to Oxton looking to build on last week's home win.

Losing the toss (again), CBH fielded first and got off to a decent start with Rob Fisher keeping it tight at the top end (0-5 off 4) and Atko nipping one out at the other. Chappers on at the top end and finding good rhythms but with Price and McWilliams well set, runs started to flow a little. Andy Brayne was hooping it round corners and when straight was hard to hit (0-14 from 2) and Chappers finished well although wicketless (0-30). Enter Ian Boothroyd to finish off at the top end and despite some early radar issues, kept it tight at the death and deservedly picked up a wicket (1-22 off 4). Our Irish International golfer S. Ogilby bowled a couple before Atko finished off with another wicket (2-10 off 4, just for you JP) and Oxton finished on 102 from their 20 overs. Some low lights of the fielding display included the skipper's footwork and Damo's headbutt (the ball, not the oppo).

Out strode Raj and Karl, determined to get us off to a solid start. Raj out first ball to a nipper-backer one that kept low. No fireworks this week from Raj's blade unfortunately. Seamus into the fray and he and Karl kept things going steadily, running well between the wickets and picking off the singles, until Karl snicked one behind off the very accurate Birley (2-3 off 4!) for 5. Mike Cook hit a couple of boundaries and some nice shots in the gaps before he holed out for 22. Seamus approaching retirement and the scoreboard slowing, the Blazers needed to up the pace a little. Scotty hit 3 lovely 4s in one over before Seamus was out caught (28) and Damo came and went after a couple of lusty blows for 7. Boothy in with only a few needed and fittingly, Scotty finished on 29*, seeig us home with an over to spare. A good chase in the face of some tight bowling on a slow wicket.

Afterwards we were very well looked after by John and ladies at Oxton, having a lovely meal and very impressive cheese board. Marvellous. Fines were amusing as per usual, although we missed our debt collector this week (Dil = fine). Tattenhall at home next week