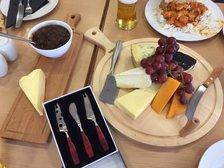 Chester BH Blazers Over 40s vs Tattenhall Over 40s

A close encounter sees the Blazers come out on top

With the forecast looking bleak, hopes were not high of the fixture taking place but thanks to Keggy's hard work and the flexibility of both teams, we managed to get a game in.

Having won the toss, skipper Atko decided to have a bat, despite the conditions. Raj made things look easy hitting a straight 6 in the first over, but succumbed to the accuracy of Steve Johnson and was out bowled. Alex Barr was looking in good form at the other end but when Steve Ogilby went for one run too many, Dil Yahathugoda was in a little earlier than planned. Dil and Milky made batting look easy, hitting the good balls for singles and punishing anyting wayward, particularly strongly down the ground. Dil out-scored Milky and retired first (31*) with the latter shortly afterwards (31*), bringing 2 new batsmen to the creasein Mike Cook and Mark Le Fox Fearnall. Foxy, realising that some consolidation was required, tried to smash his first ball and was bowled. Cooky went about his business at the other end, cutting well and nurdling 1s and 2s to good effect. Scotty also succumbed for single figures so in went Ian Martin with only a few over left. He hit some lovely shots (20*) and was briefly joined by Atko when Cooky retired for a deserved 31*. The Blazers closed on 139 which seemed competitive.

Fish & Atko with the new pill and Fishy straight into his miserly stride. No wickets this week but only going for 17 off his 4 made him slightly less grumpy (it was marginal). Ian Martin on and taking wickets, a smart c&b followed by an inside edge onto the stumps and Tattenhall were 2 down but with the dangerous John Hope and Andy Phelan in, the game was nicely poised. Mark Chapman took the brunt of the onslaught, with Milky also getting hit for a few boundaries but he finally made the breakthrough, bowling Phelan for 29. As Hope retired (30*), the Blazers managed a few tight overs and slowed the rate down again. Despite a flurry of boundaries late on, Tattenhall were always marginally behind the rate and finished 20 short on 119. A close and entertaining match in challenging conditions but credit to both sides for wanting to get the game on. Ian Martin was the pick of the bowlers with 2-12, Milky finished with 1-28 from his 4 and Atko 0-7 from 4. Thank you to our little band of helpers for scoring and 'doing the tins': Liam, Freddie & Maisie.

When everyone had thawed out, we had a very nice meal with all the usual trimmings; many thanks to Raj for sponsoring the port this week. Fines were dished out with the usual amplomb, including to our table guest and Nigel Cox! A spare week next week.