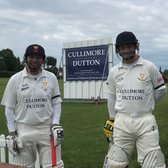 Upton Over 40s vs Chester BH Blazers Over 40s

Up and running with a win

With rain around, the Blazers headed to Upton hoping that the season would finally get going, which it did, despite some murky looking skies late on.

A rare toss win for Atko, or rather 'guess which hand the pebble is in', which he seems to be better at and the Blazers (minus Ian Martin who was still in his car), took the field. Immediate success for Fishy with a wicket 2nd ball, a smart catch from Chappers and then a wicket in his 2nd over too. Should have been 3 but at least he wasn't bothered about it. Darren Warburton was going well at the other end but Fishy eventually picked up his third thanks to a smart catch from hop-a-long Karl behind the stumps. New umpire Ankit making no mistake despite the lack of appeal from Fish. 3-6 off 3, standard. Ian Martin on to replace wicketless Chappers and debutant Graham Haywood at the top end beginning his first of a miserly 4 overs (0-4 off 4). Again, unlucky not to get a wicket and a collector's item dropped catch from ERM Roberts. Big E chipped in bowling Warburton as he tried to finish with a flurry and then had Sharrock caught by Milky at the third attempt close in. Milky capped a fine evening in the field with a run out, ably assisted by grumpster Karlos and with our third debutant Pavan finishing things off tidily, the Upton innings closed on 107-6.

With the skies darkening, Raj and Karl set about the total, Raj unfortunately chipping one up 2nd ball for a duck. Eddie Roberts in with Karl and the two batted really well, Karl (35*) on one leg whacking it and Eddie (31*) slowly building before letting loose. Both retired which brought Milky and Boothy to the wicket. The latter missed a dipping straight one (not allowed to hit those apparently) but Mr Barr (31*) went into another gear with his 'wet bat', smoking 24 off one over and losing a ball in the houses. Ian and new man Pav in to finish things off comfortably in the 13th over.

Stand up fines on the outfield with a beer courtesy of our hosts - cheers lads. MOTM - Milky, DOTD - Raj (cut his finger dropping a catch off the fines master, 2nd ball blob, then scratched his car on a speedbump on the way out. As the kids would say, Lacky.)

Tattenhall at home next week.