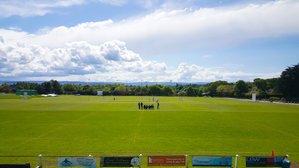 Caldy Over 40s vs Chester BHCC Blazers Over 40s

Another win on the road sees the Blazers top the table

An overcast evening in Chester, but a lovely evening on the Wirral peninsula with warm sunshine greeting us at Caldy.

Skipper Atko won a toss for a change and duly elected to have a bat. Jude Chaminda and Karl Stedman opened up and all was looking peachy with Jude retiring on 30* (fine) after a rapid start, until Karl pulled up lame with a pulled (torn?) calf muscle... luckily we had Doctor Chaminda in our midst who remained rooted to his chair while Karl was hauled off the pitch, retired hurt for 16. Eddie Roberts in with Cooky and things looked a little trickier as the inning wore on. Cooky out LBW for 3 and Boothy bowled for 1, but Ed and Milky took on the attack, the former bowled for a positive 29 and Milky retiring on 33* to steady the ship. Fishy (16*) and Pav (20*) in to finish off the innings and they did so well, putting on 40-odd in the last 5 overs as we finished on 155 from our 20.

With no Karl, we turned to Fishy for stand-in keeper duties after a brief selection process (i.e., was he grumpy enough... answer = yes). Back from injury, Atko took the new-ish pill with Chappers and after some radar issues for both, it was Chappers who struck first. Atko with a wicket in his 2nd over - good catch from Cooky - and Chappers with another 2 in his second and Caldy were up against it. Chappers finished his 4 overs (3-12) and on came Wayne Goldstein, Boothy and Pav, who all chipped in with a wicket each and keeping it economical, despite some lack-lustre fielding in the covers. Jude came on to finish things off, getting very excited about his maiden wicket for the Blazers, only to be called for a no-ball as he knocked the bails off with his new wheels (fine). Caldy finished on 77-7 from their 20 and massive thanks to Gary and the Caldy players who fielded for Karl, who scored on one leg instead (grumpily no doubt).

Afterwards we had a lovely meal and a beer courtesy of our hosts - thanks very much for the hospitality guys - and fines were, as you'd expect, entertaining. With other results going our way, we're now top of the league approaching the half-way mark. Home to Neston next week.

MOTM: Jude
DOTD: Karl (enjoying Fishy being hit in the neck last ball of the innings too much)