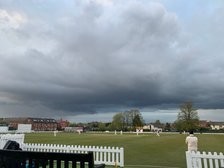 A sunny evening which quickly turned to overcast skies and a decidedly autumnal feel greeted the teams at Filkins Lane. No Karl due to injury, but he came along to score.

Skipper Atko won the toss (2 weeks running, lifetime best we think) and decided to make first use of the wicket. Jude Chaminda and Alex Barr opened up and got off to a fine start before the former was LBW attempting another audacious reverse lap for 22. Eddie Roberts joined Barr and the pair kept up a good pace before Barr (20) and then Roberts (19) were both out, bringing Steve Ogilby and Jim Gillson to the crease. This pair were more watchful on the slightly tricky surface and the scoring rate slowed a little. Gillson crafted 17 before picking out extra cover, which brought Raj to the crease who looked to be positive from the off. This sparked Seamus into life and this pair gave the innings some much-needed impetus, Seamus retiring on 30 (fine) and Raj going on to be unbeaten on 23, Ian Martin the other not out batsman. Chester finished on 147 for 4, which felt a little light.

Atko opened up with Fish, but things didn't quite go to plan and Neston got off to a flyer through Twindell and particularly Graeme Rickman, before Fishy removed the former, bowled. Neston stayed with the pace, despite the best efforts of Wayne Goldstein, Graham Haywood and Fish (1-26) and it was the wickets of Goldy (2-20) and then Ian Martin (4-26) that turned the game. Ian's excellent spell changed the momentum and Neston were behind the rate coming into the last 6 overs. Despite some big blows down the order, Neston's chase ran out of steam and they finished on 132-8, Jude Chaminda being the other wicket taker - 1-10 off an eventful 20th over. Another win for the Blazers which gives us some daylight at the top of the table. Wallasey away next week.

The innings was soured by what looked like a nasty ankle injury for Milky. He took a good catch at long on, but fell awkwardly and on the advice of Dr. Jude, hobbled off for some ice. After a trip to A&E the next day, it was confirmed as a break and whilst it won't need surgery, he'll have a big boot for a while and a lengthy rehab. All the best Milks for a speedy recovery (and thanks to Neston for offering a sub fielder for the last couple of overs).

Dinner and fines were good and thanks to Graham Haywood for sponsoring the port.

MOTM - Ian Martin
DOTD - Graham Haywood (various misdemeanours, including spending all of our innings chatting to a guest, requiring 3 different people to find an elbow support when we were fielding - which none of them could - so had to go off to find it himself, then failed to be in the correct fielding position for most of the first 8 overs. Despite bowling well after an expensive first over, unfortunately being port sponsor does not stop you being DOTD!)