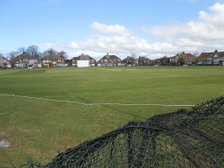 A close one at Wallasey but the Blazers come through

Following on from last weeks well managed match the skipper led the team at Wallasey CC for the first time in the Western Division. A lovely sunny evening started well with the Skipper winning the Toss and decided to have a bat. As last week Jude and Atko strolled out to the wicket with a plan to get us off to a great start with a strong, youthful batting line up behind them. First ball Atko calls for a tight run, the skipper declines the invitation!….. the first ball Atko faces he manages to use the back of his bat a spoon it to the keeper, out GOLDEN DUCK!

Atif comes to wicket puts on a great partnership with the Skipper. Some lusty blows from both resulting in the skipper retiring (30).. Fine. Then a debut for Jonty Hedgecoe, short but never going to die wondering. Jack Yates, also on debut, strolls to wicket fresh from a good score at the weekend, and nicely blocks the first ball. Fishy (fines man) notes in the little black book, but redeemed with the next ball over long off for 6! Atif out – run out for 30…. Trying to avoid a fine, but didn’t quite make it! 75 in the 9th over….. Raj comes in and a quick 5, LBW to Bourne, Matt Bennett first ball LBW…. Also to Bourne…. Looked plum from the square leg boundary, where I was scoring from! Two GD’s. Fishy promoted up the order and looked to take the time to build a partnership with Jack. He was next out with 90 on the board in the 13th over, somehow managing to direct the ball onto the stumps, surely not enough pace to knock the bails off! Unlucky. Very slow bowling, with lots of flight!

Goldy & Haywood both came and went having ignored that we had several overs left having thrown their wickets away. Fishy needs to work on his chat to the new batsmen! Last man Chappers in with Fishy farming the strike…. Managed to get to 110 before he missed a straight one, leaving Chappers (not out) and 110 AO with only 17.4 overs used. Collective fine.

Fishy opened up with a tight start, and Atko at the other end was taken for 10.. have a rest Atko…. Another 10 off Fishy’s second (and a wicket) and looking like a tight game already. The Skipper brought on Atif, who bowled well with a wicket in his first over followed by maiden from Fishy tightened up the game. Atif’s excellent spell returned 4 overs 12 for 2 and Jude juggled the remaining overs including the Champagne moment for many seasons. Jude’s first over and Raj in the covers - Bourne the batsperson, strikes an uppish drive hard into the off side and taken like it was never in doubt by Raj! First catch in 7 years for the Blazers! Scenes from the whole team…. Jonty & Jack (and Wallasey lads) wondering what the fuss was about! 61/4 in the 12th over…. CBHCC looking strong…..

A stumping appeal by stand-in keeper, Matt Bennett, off the Skippers bowling. Again it looked close from the square leg boundary. A slight disagreement from Matt, who must have nearly knocked the umpire off his shooting stick with the sound waves when it was declined. This was followed by the same man being run out, Matt giving him a little send-off….. Keepers red mist! The game was managed from then on with Goldy, Jude and Atko juggled and the final total on 101 left Wallasey 9 short of the first innings total.

A great team effort with all 11 men taking part even if not quite getting as full a game as would be liked, well done Chappers & Graham. A win… lets move on to Upton at home next week