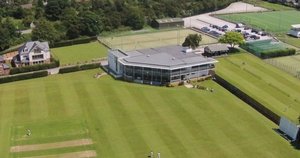 U14 John North Cup win over the Shrimpers

A good performance saw the younger of the U15 squad progress through to the next round of the U14 John North Cup.

Batting first, runs were hard to obtain as Neston bowled and fielded to a high standard. Nav and Josh H stayed poised and put on 28 for the first wicket when Nav was caught and bowled. Maaz joined and batted positively without risk at over a run a ball before being bowled for 27.

Josh H retired on 36, having held the innings together. Josh H has been a fantastic addition to the squad, scoring 111 runs in 3 innings and hasn't been dismissed; he is a prospect for the club to nurture. Ben R and Ben P came in and scored at a quick rate before James hit his traditional six, and the innings closed at 117.

We reminded the boys that they had defended less than the total against Neston before and to maintain their high standards in the field.

Maaz and Ben P open and bowled tight lines backed up by positive and vocal support of teammates; a real differentiator of our squad at this age. Neston lost wickets on 18, 23, 43 and 45 before consolidating with Ben Slight and Teddy Groves taking the game 'deep'.

Ben P and Josh H took a wicket each, with Sam Curtis topping the bowling with 2 for 12 off three overs.

CBH closed the game out with Jakob bowling and, on paper, a routine win, but the boys maintained control and executed good field placing and discipline to deserve the victory.

MoM- Josh Hollinshead for another impactful inning and good bowling performance.
DoD- No real candidates for behaviour, so Jakob gets it for lateness.