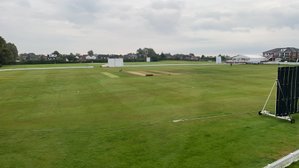 A win in the NWCL

Strong performance in the field set up a winning outcome

Batting first on a damp wicket, Northop were immediately put under pressure by accurate bowling spells from Ram and Harrison. This was followed up by probing overs from Josh L and a returning from injury, Daisy Cooke; good to have Daisy back in the fold.

Per the league regulations, all ten fielders bowled and restricted Northop to 73 from 20 overs, with Will Baker retiring on 35 in the only significant innings.

CBH chased the total with a revised batting order. James has spent a lot of games padded up as the next player in only to take them off without a new mark on his bat. So we allowed him to open the innings, and James took the chance well and hit several hard shots he is known for.

34-2 meant Josh L and Archie were at the wicket. This pairing finished the run chase quickly, scoring at over a run a ball—the pursuit completed in the tenth over.

So another satisfying evening, marked by a composed performance, but significantly, a continuance of the squad culture and enjoyment by all involved. Thank you, for the last-minute illness cover by Josh L and scoring debut by Allison; apologies for the iPad battery scare!

MoM - James for his performance behind the stumps, no byes, and good innings opening the batting
DoD - Sam Curtis for calling in sick but watching the game. A bit harsh as he was ill again later.