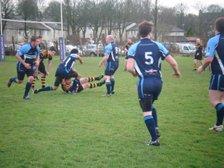 Chester Gladiators fell to a 33-4 defeat against Accrington Panthers in their first group match of the 2012 War of the Roses Cup.

The Gladiators endured a frustrating afternoon as they were unable to turn possession into points while the hosts produced a clinical display and were deserved winners.

Chester started the game brightly but could not find a way through the Panthers defence and it was Accrington who scored the game's opening try.

The Panthers soon added their second try and, with Chester failing to sparkle with ball in hand, took a 12-0 lead into the interval.

Accrington struck early in the second half to move further in front before the Gladiators began to make some inroads.

Man of the match Dan Rowett scampered over for a trademark try on 50 minutes before Jim Green and Tom Bradfield both went close to scoring.

However, Accrington held out and raced up the other end of the field to score a crucial fourth try against the run of play.

The Panthers went further ahead courtesy of a field goal and the Gladiators sensed the game running away from them.

Accrington added two more tries late on as they took advantage of some slack and tired Chester defence.

The final scoreline was somewhat harsh on the Gladiators but they will be keen to produce a much improved performance next time out.