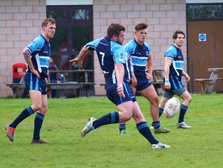 Gladiators bow out of NWML Shield

Leyland Warriors proved too strong for Chester Gladiators for the second week running, sending them out of the NWML Shield.

Gladiators more than matched the Lancashire club in the first half and showed that the team is heading in the right direction.

But the hosts dropped off in the second half and the visitors took full advantage to progress into the semi finals.

Chester handed a debut to Harry Cartwright and gave winger Mike Walker his first start of the season. Dan Rowett and Craig Jones returned to the side having missed out last week.

Gladiators produced some strong defence in the opening 40 minutes and were impressive with ball in hand against a side tipped to win the Division Four title this season.

Declan Foy crossed for his sixth try in five games and Mark Kingsley converted to get Chester on the board, although Warriors hit back well and took a narrow lead into the break.

Gladiators dipped in the second period and that gave the clinical Warriors a chance to put them to the sword, moving into a commanding lead.

Chester responded with tries from Luke Harrison and Tom Bradfield but never threatened to get anything from the game as a clinical Leyland side went through 42-16.

Hardworking prop forward Chris Young was named as man of the match for Chester, who travel to Rylands Sharks A next weekend in Division Four.