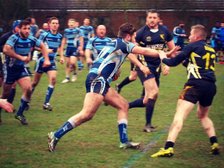 Gladiators sail past Storm to make it three from three

Chester included five under 17s in an extended squad and ran in 11 tries at Tarleton RUFC, making it three wins from three following victories over Bangor University and Eccleston Lions.

Southport started slowly and paid the price as the Gladiators raced into an 18-0 lead inside 15 minutes with tries from prop Chris Young, centre Jonny Rae and forward Daniel Munt.

Southport did begin to make inroads in the closing stages of the half but were met with some solid defence as Chester turned around with a 36-0 lead.

There was no real let up in the second-half with the Gladiators adding a further five tries, although Davies did miss two conversion attempts.

Quinn and Jones completed doubles, Ben Stelmaszek crashed over, Joel Gibbs touched down and Josh Walker grabbed the final score to wrap up the contest.

Southport stuck to the task in the face of some clinical finishing and showed a commendable attitude to the end, coming close to scoring on a couple of occasions but finding Chester's defence in no mood to concede.