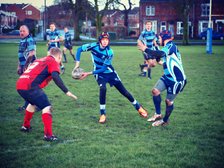 Chester Gladiators made it two wins from two in pre-season with a convincing 38-18 win over Eccleston Lions on Saturday.

Eccleston are a division higher than Gladiators but after a close first period David Kirby's team blew them away in the second-half, outscoring them five tries to one at The Barony in Nantwich.

Loose forward Ben Stelmaszek crowned an impressive debut with a brace and the win should give Chester a lot of confidence ahead of the new season, which starts next month.

Tries from back rower Joe Hickey and Stelmaszek had Gladiators 12-6 up at the break but an emphatic second 40 minutes resulted in Stelmaszek, full-back Simon Quinn, Dave Beddows, Damien Tierney and Mark Kingsley crossing the whitewash.

Despite it being pre-season, there was a real intensity about the game and tempers boiled over in the second-half with both teams having a man sent to the sin-bin.

There were plenty of positives for the Gladiators, not least the performances of teenagers Ryan Turner, Dan Munt and Callum Bedson on their first senior appearances.

Chester take another step towards the 2015 season proper on Saturday with a trip to Southport Storm (2pm).