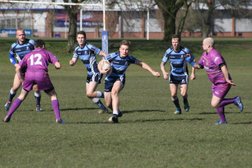 Chester Gladiators issued a signal of intent with a 68-0 demolition of Westhoughton Lions in the North West Men's League Shield.

Teenage prop forward Daniel Munt led the scoring with four tries as the Gladiators dominated from start to finish, producing some fearsome defence to keep the Lions out.

Westhoughton had the first possession of the game but massive defence resulted in a turnover, giving Chester the chance to open the scoring.

Ben Stelmaszek hit Chris Jones with a football-like one-two, receiving the ball back for an excellent team try although Aled Davies could not land the conversion.

Chester's spirit and structure was outstanding from the outset and it wasn't long before full-back Simon Quinn showed off his quick footwork to score down the left with Davies converting for a 10-0 lead.

Kirby's team showed good discipline with just one penalty conceded but did commit too many knock-ons, the first of which gave Westhoughton and opportunity to find a weakness in the defence.

However, the Gladiators had other ideas and huge defence from Chris Young and Tom Woods forced the Lions into an error before Munt stepped between Westhoughton defenders like they were not there to touch down, Davies' conversion making the score 16-0.

Davies then danced around the defence in Billy Elliot fashion to score to the right of the posts and converted to give Chester a 22-0 lead after just 25 minutes.

Replacement forwards Paul Foster and Gareth Davies made a big impact off the bench with barnstorming runs leading to 16-year-old Woods putting a grubber kick through the defence which was Quinn regathered and passed inside for Munt to score for a 28-0 lead at half-time.

Chester continued to stick to the structure in the second-half with Kiwi prop Kellum Friday and centre Jonny Rae making big inroads, and Mark Kingsley bossing things from hooker.

A bull in a china shop run from Young created the next score as Munt ran 40 metres to complete his hat-trick and Davies converted to increase the advantage to 34-0.

From the restart, Friday steamrolled over defenders and Munt chased and grounded his own kick but the referee ruled the score out, denying the forward his fourth of the game.

However, Munt could not be kept out for long and crossed again for a beautiful one-handed offload from Jones with Davies adding the extras.

Chester continued to create opportunities and a show-and-go from Kingsley resulted in him touching down and Davies bringing up the 50 with the conversion.

Tom Bradfield was rewarded for a hardworking display with a great individual try down the right and Jones smashed through defenders from the restart before offloading to Stelmaszek for his second of the game.

Westhoughton failed with three drop goals in an attempt register some points and Kingsley had the last word when he crossed for his hat-trick with Davies' conversion completing the scoring.