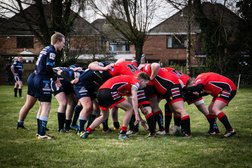 The final scoreline was perhaps harsh on the Gladiators, who matched their hosts for large parts of the game before running out of steam late on as the options on the bench began to run thin.

There was little between the teams in the opening 40 minutes and although the Lions struck first to take a 6-0 lead, Chester hit back well with Mike Walker finishing off a fine Martin Sutton break to touchdown and then level the scores with the conversion. However, on the stroke of half-time Eccleston crashed over the whitewash to go into the break 12-6 ahead and the Gladiators never quite recovered.

The Lions defence repelled Chester's attacking raids in the early stages of the second period and then crossed for their third converted score to move 12 points clear. With the home side's bigger pack and some tough calls wearing down the Gladiators' resistance, Eccleston wrapped up the two points with the game's final score to complete the win.

Dave Fee picked up the man of the match honours after an impressive debut for Chester, who host Westhoughton Lions next weekend.