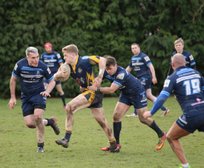 Lions too strong for under-strength Gladiators

A much depleted Chester Gladiators were on the wrong end of a 10-54 scoreline against Westhoughton Lions in North West Men's League Division Three.

With no fewer than 24 players unavailable for various reasons, the Chester squad was stretched to its limit and, in the circumstances, the outcome is perhaps not a surprise, although the scoreline doesn't reflect the home side's effort.

Much of the damage was done in the opening 15 minutes as the Gladiators were caught in the headlights allowing the Lions to run in three unanswered tries and open up a 14 point lead. Chester responded with Dylan Rowe scything through the visiting defence and converting to make the score 6-14, but the good work was undone as Westhoughton hit back straight from the restart and added another soon after to lead 4-26 at the turnaround.

The Gladiators struggled for fluency with ball in hand and, despite periods of strong defence, a lack of possession, mistakes and a couple of tough calls, allowed the Lions to keep the scoreboard ticking over after the break. Mike Walker did provide some respite when he sliced between defenders for a well worked score but he was unable to add the extras as Westhoughton ran out comfortable winners.

Chester will be disappointed with the end result, but there was no lack of spirit and heart from the under-strength hosts, who are next in action with a trip to Burtonwood Bridge on April 7.