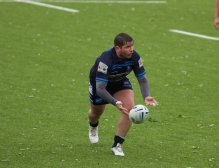 Gladiators off to a winning start

Chester Gladiators ran in nine tries in an impressive 54-4 win at Clock Face Miners A on the opening weekend of the 2020 campaign.

Andrew Bowles led the way with a hat-trick of tries and nine from nine with boot for a personal haul of 30 points in Nathan Ainsworth's first game as head coach.

Dan Rowett marked his return to the Chester ranks with the game's opening score on 10 minutes before quickfire tries from Bowles and Craig Jones put the visitors in command with 20 minutes on the clock with Mike Walker adding another four pointer before the break.

The Gladiators continued to dominate after the break with Adam Kirby crossing to extending the lead and Bowles completed his treble with two further tries either side of a Joe Ives score with the final word going to Jones as he bagged his second in the final moments of the game.

Despite not managing to make it over the whitewash, teenage wingers Ed Stockton and Tim Cooke impressed on debut while the returning Rowett and Walker looked at home back in the Gladiators shirt.