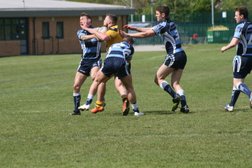 Gladiators given a fright but finish strong to beat Bears

Widnes responded well having fallen behind early on to lead 12-10 at the end of the first-half and extended the advantage in the second period as the game looked to be slipping through unbeaten Chester's grasp.

However, the Gladiators dug deep and took advantage of a sin-binning to seize control of the game with three unanswered tries while West Bank were down to 12 men and make it six wins from six in the league.

Loose forward Ben Stelmaszek gave Chester the perfect start when he powered over in the corner for the opening try of the afternoon, although Aled Davies couldn't land the extras.

Stelmaszek then burst through a gap in the defence to get his second with Davies' successful conversion making the score 10-0 as things looked to be going to plan.

But the visitors, who had a powerful pack, began to make inroads as the game turned into an arm-wrestle and punched two big holes in Chester's line as a pair of converted tries sent them into half-time ahead.

Widnes' greater power up front continued to bear fruit in the second-period and another score moved them into a 16-10 lead before a yellow card for fighting gave the Gladiators a route back into the game.

And it was gratefully accepted as the impressive Stelmaszek completed his hat-trick before full-back Cameron Hogg collected a fine Joe Hickey offload to race clear and dive over the line.

Mark Kingsley burrowed his way over from dummy half as Chester opened up a 26-16 advantage and although West Bank closed the gap with an unconverted score, the last word went to the hosts as Stelmaszek crowed a man of the match performance with his fourth of the afternoon.