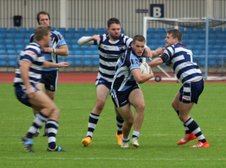 Chester Gladiators tasted defeat for the first time this season, going down 32-26 to Manchester Rangers on Friday night.

Chester travelled to the 6,500-capacity Manchester Regional Arena to face an in-form Rangers outfit and paid the price for a lacklustre opening 40 minutes.

The Gladiators never got going in the first-half, turning over too much ball and conceding soft penalties to allow the hosts to build up a healthy 20-10 lead at the turnaround.

Rangers grew the lead to 16 points in the second period before Chester came to life, scoring three tries inside 10 minutes to level the scores at 26-26, but Manchester scored against the run of play to regain the lead and held on for the points with some determined defence late on.

Chester started the game well enough but two quick penalties resulted in Rangers winger Matt Valentine crossing out wide on the right to give his team a 4-0 lead and Manchester moved 10-0 up a couple of minutes later when Josh Watson went over from close range.

The Gladiators rallied with Aled Davies scooping up a loose ball and releasing Jonny Rae to touch down, and Davies then finished off a sweeping move to tie the game up at 10-10.

Manchester punished a lapse of concentration to regain the lead when Jacob Winstanley burrowed over and when Josh Dolan crossed on the right the visitors found them 20-10 down going into the break.

Jordan Green kept the scoreboard ticking over with a penalty early in the second-half but the momentum of the game had shifted with Gladiators now controlling possession, however an 80m break from Joe Moura Da Luz moved Manchester into a 16 point lead and left Chester staring defeat in the face.

That was the cue for the visitors to produce a devastating spell of rugby league with Billy Brickhill, Paul Welch and Lee Rusowicz, who split open the defence with a surging run, scoring in quick succession and Davies converting twice to level things up.

Manchester were now on the ropes but a questionable penalty offered them a lifeline and Rangers seized the invitation with David Gooch breaking through the defence for an excellent score to move his team 32-26 ahead.

Chester pushed hard in the closing stages but a combination of desperate defence and a lack of composure resulted in a couple of excellent chances being spurned as Rangers held on for the win in an excellent advert for the North West Men's League.