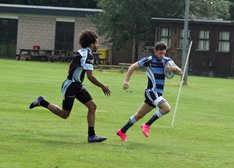 Having lost their unbeaten record to Manchester Rangers in their previous outing, the Gladiators were in determined mood at The Cheshire County Sports Club on Saturday.

Aled Davies, operating at full-back for the first time in a Chester shirt, starred with a hat-trick of tries in a one-sided rout, although the understrength Sharks kept going until the end.

Davies gave the hosts an an early lead when he crossed wide on the left, although he was unable to land the conversion.

Second-row forward Chris Jones doubled the advantage with a powerful charge to the line, again Davies missed with the extras from a tight angle.

Davies finished off a smart spread of passes for his second of the game to make the score 12-0 before winger Mike Walker scooped up a spilled pass and raced 50 metres and score in the corner.

Warrington-based Rylands had been starved of the ball but did then start to make some inroads but couldn't find a chink in the home defence.

Tom Bradfield muscled through the defence on the half hour to touch down next to the posts with Davies making his first successful conversion for a 22-0 lead and hooker Tom Roberts finished well from close range on the stroke of half-time as Chester went in leading 28-0.

Davies completed his hat-trick and converted his own try to extend the lead to 34-0 before Gibbs grounded a kick from his half-back partner Kingsley for a delightful score.

Rylands battled on but began to wilt in the heat with forward Craig Jones and leading scorer Ben Stelmaszek crossing, although Sharks full-back Aaron Holliday pulled off three try-saving tackles.

Centre Jonny Rae got in on the scoring act following a barnstorming run from prop Billy Forrester and Mike Walker finished off the scoring late on when he found space on the outside as the game ended 64-0 to the Gladiators.

Chester have the bank holiday weekend off and then welcome Cadishead Rhinos on September 5 (2.30pm).