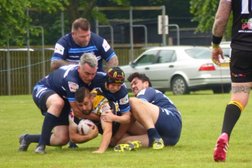 Chester Gladiators were unable to make it three straight league wins as Wigan Bulldogs came from behind to triumph 28-14.

The Gladiators made a dream start to the North West Men’s League Division Three clash on Sunday with two tries in the opening 15 minutes giving them an 8-0 advantage.

But the visitors hit back in front of a good crowd at The Cheshire County Sports Club to take a narrow lead into the half-time interval and took charge of the contest after the break before Chester scored late on to make the final scoreline more respectable.

Mike Walker opened the scoring for the Gladiators after five minutes when he crossed in the corner after the ball was shifted right with centre Daniel Munt putting the winger over the line.

Chester moved further ahead in the 10th minute when Tom Bradfield on the opposite wing pounced on a spilled ball, broke a couple of tackles and raced 70 metres to score out wide despite the best efforts of the Wigan fullback.

But that was as good as things got for the hosts as Wigan began to gain the upper hand with a succession of penalties and Chester errors allowing them to dominate possession.

The Gladiators defended well but the weight of pressure soon told and two quick-fire tries, one of which was converted, gave the Bulldogs a 12-10 lead at the end of the first period.

Chester looked to have steadied the ship following the restart but Wigan’s big forwards continued to wear them down and as fatigue began to kick in, so too did missed tackles as the Bulldogs crossed twice more to move 22-8 ahead.

The Gladiators had chances but too often selected the wrong option and the visitors wrapped up the points with 10 minutes to go, finding a gap in the defence to score under the posts.

Chester kept going to their credit and did manage to have the last word when captain Mark Kingsley broke through a hole and sprinted clear to touch down, adding the conversion to make the final score 28-14 to the visitors.

The Gladiators are at home again on Saturday against league leaders Wigan St Judes A (2.30pm).