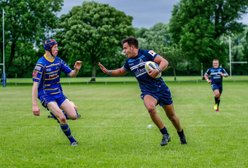 Gladiators close in on play-offs with gutsy win

Chester Gladiators took a huge step towards a top-four finish with a gutsy 34-30 on the road win at Burtonwood Bridge in North West Men's League Division Three.

The victory means Chester can secure a place in the end of season play-offs with a win at home to Bold Miners on Saturday (2.30pm) due to a superior points difference over Burtonwood, who have a game in hand.

Despite several absences forcing them into fielding a makeshift line-up, the Gladiators produced a determined display to overcome the hosts at Fir Tree Lane.

Jonny Rae led the scoring charge with a hat-trick of tries for Adam Turner's men, who can complete a league double over Bold this weekend and book a trip to runaway league leaders Wigan St Judes A in the play-offs.

Teenager Dylan Rowe produced a controlled performance in the halves alongside skipper Mark Kingsley with the youngster contributing one of his team's six tries.

Forward Chris Jones capped an impressive showing with another of the scores while Benny Joseph crossed for a try on his Gladiators debut.

Chester's final game of the regular season sees them entertain Bold Miners at The Cheshire County Sports Club on Saturday in a 2.30pm kick-off.