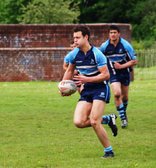 Gladiators ran in nine tries in a dominant performance against a Rhinos side regarded as tough to beat despite being at the wrong end of the table.

Chester welcomed back Cartwright, stand off Declan Foy and named Frenchman Jonathan Soum, who is hoping to earn a professional deal in the UK, in the centres.

With rain falling on and off, conditions were not ideal but Gladiators started well and took an early lead when Benson slid through a hole in the defence to score with Mark Kingsley converting.

Rae the took a short pass and burst through the defensive live to race clear and touch down for his first of the game. Kingsley again converted to put Chester 12-0 up.

Cadishead found a response with prop Richie Hayes crashing over from close range, although his conversion hit the posts to leave the hosts eight points down.

Gladiators were keeping to a good structure with ball in hand and some quick hands on the right released Toland, who waltzed in at the corner to score although Kingsley could not land the conversion.

Rae then showed good awareness to score his second, swooping on a dropped ball in his own half and racing away to score with Kingsley's conversion putting Chester 22-4 ahead.

Cadishead began to struggle with their discipline and a succession of penalties resulted in Cartwright powering over before half time and Kingsley covering to make the score 28-4 at the break.

Any hopes the hosts had of getting back in the game vanished five minutes into the second half when Cartwright showed good strength to squeeze over the line and Hayes was sent off for raising his hands as tempers flared.

Oakden then finished off a smart move for his first for the club, although Kingsley could not convert making the score 38-4 in Chester's favour.

Cadishead worked hard but never came close to breaking through Chester's stubborn defence and went down to 11 men when their scrum half went to the sin-bin for throwing the ball at Kingsley's head.

Gladiators made the numerical advantage count when Rae powered through a gap and sealed his hat-trick, although Kingsley could not add the extras.

With time running out, Oakden collected a fine inside pass from Foy and shot through the defensive line to touch down with Chris Pape landing the conversion to complete the scoring.