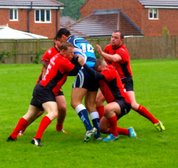 Constant heavy rain made conditions extremely tough but both sides contributed to a captivating contest that went to the wire.

After an arm wrestle in the opening 10 minutes, it was the hosts who struck first, scoring under the posts to take a 6-0 lead.

Chester saw plenty of ball but the Lions defence held firm until the 38th minute when McDonagh powered over to make the half time score 6-4.

Gladiators improved in the second half, penning the home side in and producing some fierce defence.

McDonagh crossed for his second and captain Mark Kingsley squeezed through a gap to put his side 16-6 up with 20 minutes to go.

Eccleston battled back and a clever kick and chase got them back within four points as the clock ticked down.

Chester kept the Lions out but the pressure told in the final minute when the ball was whipped left and the hosts went over in the corner but the conversion missed the mark leaving the scores tied.