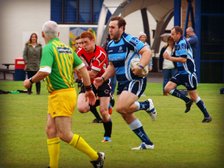 Tom Bradfield finished with four tries as the red-hot Gladiators romped past the Rhinos.

Chester dominated the game from start to finish, running in 15 tries and making it seven games unbeaten.

Cadishead have conceded 126 points and scored four in the two meetings between the clubs this season but deserve credit for working hard until the end.

Props Kellum Friday and Luke Edwards laid the platform for the home side and veteran Paul Foster impressed as the stand-in hooker.

Bradfield opened the scoring on eight minutes and Friday powered over from 20 metres out minutes later to put the hosts in command.

Gladiators did not let off in the second half with Rae grabbing two more to complete his hat-trick and Bradfield collecting his fourth.

Oakden got himself on the board with 20 minutes to go and Quinn claimed his second before replacement prop Luke Harrison powered in a brace.