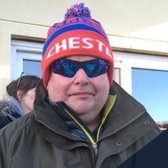 View From the Touchline

The first in an irregular series of spectator chat. Dave Maddocks' thoughts on the season and what Chester RUFC means to him

1st XV - Well I’ve been stood on the steps by our beloved wall for 13 years now watching the Mighty Chester, and regardless of what happens till the end of the season this will be the highest league finish we’ve had! Playing some of the best Rugby ever (2nd half Fylde and Huddersfield) against very strong opposition.
With the addition of the new AGP, the season started with a renewed enthusiasm of what would happen but also with a touch of trepidation as to how the lads would adapt to it?! Well within the first few weeks it was plain to see that all 3 teams loved playing on it and had found the new pace to the game that it brings well within their capabilities. The 2’s and 3’s relishing the chance as always to play on Pitch 1 (why wouldn’t you??) The 1st XV have had an unbelievable season! Only losing once at home so far is no surprise as Fortress Hare Lane can’t be an easy place to come for the opposition. The big difference from last season to this has been our away form, something I know Jan and Nick were keen to rectify. Moreover, we’ve been picking up bonus points both away and at home. We’ve lost 7 games away from home all season but managed to come away with at least a bonus point in all but 3 away games!! A brilliant turnaround. A fantastic return meaning even when we’ve been beaten we’ve been competitive.
The most striking thing for me about the 1st XV performances has been how fit they are!! Always finishing so strongly in the 2nd half that many teams have struggled to stay in the arm wrestle. Notably away at Stourbridge to earn a vital draw plus a 4 try bonus point and the 2nd halves away at Fylde and, the best performance of the season, at home to Huddersfield. All quality opponents. Another facet of the 1st XV is how interchangeable they are! 2nd Row and Back Row is seamless, so too, rotating the back row and the decision to move Shay to 8 looks inspired!!(not bad for a centre??!). Again, the backs can all rotate and fill in where necessary; wings to centre, centre to full back, wing to full back. If playing out of position is what’s required by the squad, they get on with it. Injuries are inevitable at this level, such is the physicality of the league, but because of the fluidity between all 3 squads, anyone asked to step up has grabbed the opportunity with both hands and looked at ease when given the opportunity. When you have the faith of the coaching staff and fellow team mates, it makes a massive difference to that player. Sadly, Saturday’s heavy defeat away at Sedge means we are still need one win to guarantee the play-off spot. Hopefully we will have a bumper crowd for the final home game of the season on Saturday against Otley. Regardless of the results of the last 2 games, Jan, Nick and the lads have performed admirably throughout the season and have done the badge proud and, as always, have been a pleasure to watch!!

2nd XV - The Mighty 2’s we’re always going to find it tough to replicate last season’s league and cup double, and so it has proved. Things just haven’t gone the way of Cec and Stu’s 2nd XV. With Sale conceding too many games they were asked to leave the league, but the points teams had got against them could stand, and we hadn’t played them so unfortunately, we’d lost the chance to win the league by default. Added to that we suffered the miscommunication in the Cup meaning we were out of that too. I’ve watched every home game of the 2’s and they have played some great rugby. They’ve lost 6 games all season which given the standard of the top 6 sides in their league is something to be proud of. Cec and Stu have been able to field a large core of the squad all season which is always a great help. Once again, when needed, any 3’s stepping up have done it seamlessly due to the inclusive nature of the 3 squads. What the 2nd XV have done this season is bring the Friday Night Lights!! When home fixtures clashed with 1st XV or 3rd XV on a Saturday they have offered the opposition the option of playing on a Friday evening. This has been a great initiative and has given the club extra revenue through bar and cafe sales and has also ensured that the 3rd XV could play on Pitch 1 when they wouldn’t previously have had the opportunity. The lads enjoy playing on a Friday Night, and gives them the Saturday off for family time or go shopping with the Mrs??!! The top 5 teams in the 2’s league have applied to go into open leagues from next season and hopefully all their requests will be granted as they are all more than capable of holding their own.

3rd XV - What can you say about the Mighty 3’s??! They’ve been transformed over the last couple of seasons from a team that scrambled 14/15 players together who never trained, to a squad blooding junior and senior colts into Senior Rugby and a squad touching 30 who train twice a week with 2 coaches??! Outstanding. Vaughan and Pod are a weekly driving force, pushing for availability for training and match day. Jonathan and Rob coming in have guided them in to a winning direction and mentality. The 3’s are in a very competitive league, but they play a lovely brand of rugby. There is only 1 other 3rd XV team in the league. All the rest are 2nd XVs and there are even two 1st XVs! A bonus point win at homecoming league leaders Holmes Chapel would secure the league for the 3rd XV and it would be no more than the lads deserve. As committed and taking as much pride in the badge as the 1st XV and 2nd XV, they are a very close-knit bunch of lads.

In Summary - 13 years ago I started watching Chester as my son Joe had watched Scrum V with me on a Friday evening the season before he was 7. He wanted to give it a go so we took him to a pre-season in the August and he started U7’s in the September. We go every Saturday whoever is at home and have made many lifelong friends some sadly no longer with us. Coaches, players, Joe’s teammates and parents and the usual spectators on a Saturday. We’ve always been made to feel welcome from the very first day and taking Joe down to Hare Lane was, as a family, the best thing we ever did. Safe to say we absolutely love it and Chester RUFC is in good hands and good health. See you all Saturday for the last home game to cheer the lads on and hopefully secure that bonus point win and play-off spot!!
All the best Dave