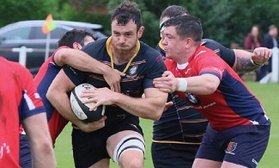 This was a typical early season game where neither side looked fully into their stride yet ,and there were plenty of errors all round. It was a second narrow away defeat in a row for Chester, who came close, but could not come away with any league points. Caldy were probably just about worth their win because of the strong performance of their pack, especially in the first half.

Chester kicked off on an overcast afternoon that was, unusually for Caldy, almost windless. The home side were quickly into their stride, winning three early penalties. Two of these they kicked to go 6-0 up after only eight minutes. That they were unable to add to their points tally for the remainder of the first half spoke volumes for the visitors’ defence. This was seen at its best around the 20th minute, when the home side won two more penalties in rapid succession to set up an attacking lineout on the Chester 22. This they drove and eventually set up a series of four 5 metre scrums - two for Caldy and two for Chester. The Caldy pack had clearly been dominant, pushing Chester around and winning scrum penalties. But, the Chester pack dug in and eventually won a scrum penalty of their own to relieve the pressure.

Chester found it very difficult to keep hold of the ball and build any consistent field position. As well as their scrum difficulties, their lineout malfunctioned at key moments. Twice, attacking lineouts in the Caldy 22 were blown up by the referee for crooked throws, after Chester chose to go to the back. To make matters worse a penalty intended to set up a third attacking lineout went dead. Given how little ball they had to play with, these were expensive errors. Chester did manage a charge down in the home 22, but Kyle Joseph could not quite hold a hurried pass around his ankles, which might have brought a score. Hence, as half time approached it seemed as though Chester would go in scoreless. Then, with the last move of the half they ran a free kick just inside the home 22. The ball was rucked twice before scrum half Tom Holloway broke right 5 metres out. His pass beat the remaining defender to allow right wing Sean Green to cross unopposed for an unconverted try. After a difficult, half a one point deficit looked a decent result.

The second half was in many ways an improvement on the first. Whilst the visitors’ scrum was never dominant, it held its own rather better. If anything, the lineout showed a greater improvement, providing a more reliable source of possession than earlier. However, on reflection, it is probably fair to say that, on the day, the Chester runners did not have a lot of quick ball to play with. To their credit, the Caldy defence probably showed the greater line speed as well, leading to errors under pressure. Despite these improvements, Caldy at last managed a well worked try of their own, from a scrum under the visitors’ posts in the 49th minute, to which was added a touchline conversion to put them 13-5 up.
Chester’s attacking problems were exemplified on the hour mark, when their pack drove a lineout on the Caldy 22. The ball was then moved right and left five times across the 22 without making any discernable dent in the home defence, until a Chester hand knocked it on. The Caldy pack had looked to be blowing a bit, but with ten minutes left the home side managed another try. They moved the ball right from a scrum just outside the Chester 22. After a series of carries, Chester eventually ran out of defenders and a Caldy lock crossed for an unconverted try.

Although at 18-5 down the match looked gone, Chester continued to attack and were finding more space in the home defence. First they ran another free kick. The ball was kicked into the Caldy 22 and retrieved by a Chester player. With a little more support and patience a try could have been constructed. But, as it was, Rhodri Parry in support could not quite hold a hasty pass. Finally, however, Chester’s attacking intent was rewarded in the 76th minute. Using quick ball, outside centre Tom Foden was able to make a clean break deep in the Caldy 22, before giving the ball to left wing Harrison Vare on the switch. Harrison crossed for the try. Unfortunately the conversion was missed to deny Chester a bonus point, despite the match ending 2 tries apiece.