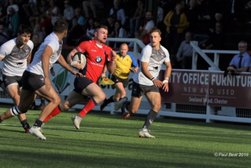 This was an exciting match in which the lead changed hands several times, with Chester only pulling away deep into the final quarter. It was a good home win against a side that was relegated only at the end of last season. Neither side yet looked quite the finished article and it was the home pack’s greater physicality at scrums and at the breakdown that eventually wore down the students. The Chester performance was crowned by an individual try from Harrison Vare (pictured) that may well be the best seen at Hare Lane this season, perhaps even for several seasons.

The match was played on a perfect sunny afternoon for running rugby, but with a gusting, blustery wind that changed direction markedly at times. Loughborough were quickly into their stride, demonstrating an intent to play a loose running game and moving the ball quickly to the flanks. In only the second minute their winger broke down the right flank from half way before slipping the ball inside to his supporting centre, who crossed for a well worked converted try. The visitors were ahead before most of the Vice Presidents had left their lunch tables.

Order was quickly restored only four minutes later, when the Chester pack drove an attacking lineout for hooker Alick Reed to score a try. Callum Bennett narrowly missed a difficult conversion. These first two tries in many ways set a pattern that dominated pretty much the whole afternoon. Chester’s lineout was a hugely potent weapon, provided it could function efficiently. While only a couple were actually lost, several others malfunctioned so that planned moves were aborted and attacking momentum was lost. The home pack was also dominant in the scrums and won penalties and turnovers at the breakdown. Approaching the end of the first quarter the resulting pressure yielded points. After Tom Foden almost scored in the corner, losing the ball in a try saving tackle, the pack drove another lineout. A series of pick and goes broke down the students’ defence, and allowed Kyle Joseph to cross for a try converted by Callum Bennett to put Chester 12-7 in front.

The half continued on in its topsy turvy way to half time. Within four minutes Chester first knocked on in the Loughborough 22 and immediately conceded a penalty around their own 10 metre line when the students counter attacked. This was kicked to make the score 12-10. Chester then conceded another breakdown penalty, which put Loughborough narrowly in front 12-13 at the interval.

Things got worse for Chester at the start of the second half. A penalty set up a Loughborough lineout on the home 22. Now it was the visitors’ turn to drive a lineout. Chester held up the initial drive, but a series of pick and goes let Loughborough in for another converted try to make the score 12-20. However, within 5 minutes Chester drove an efficient attacking lineout of their own for a try, converted by Callum Bennett to move the score to within a point.
Both sides had further opportunities, notably for ten minutes around the hour mark, when Chester seemed trapped in their own back third of the pitch. But, neither side seemed able make a conclusive dent in the other’s defence. Then, on 74 minutes, Loughborough had a man binned close to their line after a prior team warning from the referee. Chester chose to take a scrum from the penalty. The scrum spun, but Chester then began a powerful series of pick and goes that drew in ever more defenders. Eventually, the defence broke and a forward crashed over for an unconverted try to put the home side 24-23 in front.

The best, however, had been saved till last. Following the restart, Chester regained control of the ball and moved the play left. They set up a breakdown six metres from the touchline. The ball was passed to Harrison Vare in the tramlines. The Loughborough defence was slow to cover. Their scrum half tried to fill the space, but Harrison cut infield off his left foot, gave him a nudge, and broke into space. Two defenders covered across, but Harrison’s move infield had given him the initiative and put them on the back foot. He used his advantage to break between them and drift back out to score in the corner. This made the score 29-20, but Loughborough gained a deserved bonus point from a late penalty.