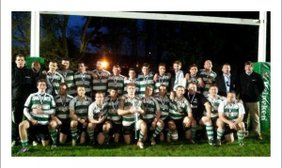 A first ever victory over Bridgwater and Albion

Top of the league and a big win over one of Somerset oldest established clubs.

Bridgwater & Albion 10 Chew Valley 51
A first ever win against Bridgwater for Chew Valley was based on a solid forward platform coupled with stiffling defence. A Tom Waddington turnover at flanker gave fullback Tom Bryan his first successful shot from the kick off and the try of the season so far from second row Richard Light on the end of a passing movement through 8 pairs of hands. Bryan converted on 6 minutes.
The visitors then gifted possession and a series of penalties, one of which was converted by outside half Stuart Heal. Centre Joe Cowell saw yellow entering a ruck through the Bridgwater gate, in his absence french full back Louka Viala scored a well worked try converted by Heal and it was level on 35 minutes. The game changed with two quick tries from Chew Valley at the end of the half. The first following a lineout 5 metres out from flanker Matt Wright and the second from Bryan set up by strong carries by second row and man of the match Ben Whitemore and prop Dean Brooker. Bryan converted both. Having used all of their replacements by half time the hosts were struggling for most of the second half. With the wind at their backs and scrum dominance simple hands from a scrum five put winger Joe Webb in on 50 minutes for the try bonus point. Centre Charles Shallcross added another on the hour and the visitors were clear. conversions and a penalty from Bryan added to Bridgwater woes. With Shallcross into the back row and Reece Carter on for the last 10 minutes there was no let up. Scrum half Jack Summers scored in the corner courtesy of hooker Jack Monk taking one against the head and with replacement No 8 Luke Sparkes Brown on the shoulder of Joe Cowell close to the line to.take the pass which with the Bryan kicks took Chew Valley to beyond the fifty and a memorable win . Wellington at home next week and some selection headaches for coach Steve Worral and D.o R Bruce Wellman.
Share via
FacebookTwitter
https://www.pitchero.com/clubs
Recent news