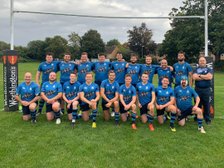 Following the early end of the rugby season in England, as a result of COVID-19, the RFU has announced the final league positions.

Chichester 2nd XV have been confirmed as champions of Hampshire 1 and are promoted to Hampshire Premier.

It was a very competitive season that saw Chichester finish 1 point ahead of Overton, with Southampton University Hospitals and Locks Heath Pumas both 4 points further back.

Top of the league changed 6 times after Christmas and Chichester regained top spot with their win away at Fawley on the 14th of March.

Next season we look forward to a local derby with Bognor!