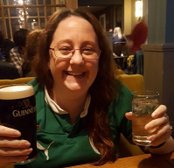 I am delighted to share with you that, with immediate effect, Jules Boyce will assume the role of "Head of Women’s Rugby" at CRFC. This is an important step in formalising the re-establishment of women’s rugby at Chichester, which has been slowly emerging over the past two seasons.

I first met Jules 2 years ago after she had moved to Chichester and had contacted the Club looking for a team to play for. We did not have one. At that first meeting she agreed to lead the efforts to restart women’s rugby at CRFC from scratch and since then has worked hard to successfully draw in new players, has attracted 3 new sponsors and encouraged a coaching team into supporting her vision.

Jules will be part of the Senior Club Committee and be responsible for all aspects of delivering senior women’s rugby at CRFC. She is also keen to support the development of U15/18 girl's rugby at our Club. Jules will get rugby advice and guidance from our DoR, support from the Senior Committee and liaise directly with Sussex RFU.

Jules has been playing rugby for 12 years and her previous clubs include Millwall and Worthing. As well enjoying training, playing and watching our fantastic sport, she is also a Leinster and Ireland supporter.

Congratulations Jules, the future of women’s rugby at CRFC is in good hands.