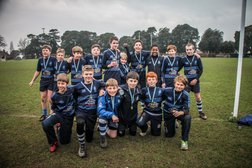 As defending West Sussex and Sussex champions, Chichester U12's were looking forward to defending their title at their home ground in Chichester. Under new rules from the Sussex RFU East and West Sussex have been divided into 4 regional zones, with the winners of each of the 4 regions going forwards to the All Sussex final on April 29th.

Chichester faced Bognor, Worthing and Pulborough in a round robin format, followed by a semi final and final to decide the rgional champions. Chichester started calmly with a steady start against Bognor with a convincing 3 tries to 0 win against their local rivals.

Next up was Worthing for Chichester and after the steady win against Bognor Chichester decided to turn on the style against Worthing. Fast running, crisp passing, flair and total focus saw Chichester start running in try after try against a stunned Worthing. Chichester were simply on another level as the game finished 8 tries to 0 to Chichester.

Pulborough were the final opponents for the pool stages and, as previous winners of the championship, formidable opposition. From the start it was a physical game but Chichester dominated the entire match, barely letting Pulborough see the ball. A 2 tries to 0 victory to Chichester secured the pool win with no tries being conceded.

The semi final saw Chichester play 4th place Worthing and again Chichester dominated the game from the kick off, rucking Worthing off the ball at every opportunity and the Chichester scrum really starting to show how dominant it can be. The game ended with a 6 tries to 0 victory to Chichester to move into the final against Pulborough.

The final game saw Chichester again take on Pulborough - who were looking to exact revenge for their earlier loss. Chichester had possession for almost all of the game, again penning Pulborough into their own half to play defensively for almost the entire match. The Chichester scrum was huge and powered Chichester forward up the field scrum after scrum to score their first try. Pulborough defended with true grit and determination, holding the ball up in the try area twice to prevent Chichester scoring further tries and caught Chichester napping late in the second half to run in the first try against the Chichester team all day. The boys will reflect back the many wasted chances they should have capitalised on. The game finished as a 1 try all draw - with the Championship win going to Chichester U12's as the only undefeated team of the day with an incredible 20 tries scored and only 1 try conceded in 5 matches.