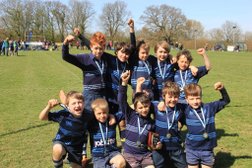 Under 9s are Sussex Champions!

Holding onto the title for a second year, the Under 9s emerged victorious from the Sussex Finals at Crowborough

The standard for all matches was very very tough. The tournament was played in a round robin format, excellently organised by Crowborough, with stunning weather!

Our first match was against the hosts Crowborough, the Sussex East champions, who were confident having had their A’s play their B’s in their regional final. They had a couple of big fast runners who they kept feeding the ball to who crashed into our press defence, but our speed and ferocious tackling prevented them getting much steam. Won 5-0.

The second game was against Brighton, the Sussex South champions, who were tactically tougher as they varied their strong runners with spreading it wide to exploiting space that opens up when the defence naturally gets sucked in. Won 3-0.

The final game was the clash of the two unbeaten teams of the day in the U9 age group. Horsham, the Sussex North champions, had the biggest and strongest runners of the day. Their tactics were similar to Brighton's and their defence was the toughest that we have faced all season being similar to ours in style- pressing exceptionally hard and "on the edge" of that off-side line. Won 2-0!

Overall our solid press defence, where all players aggressively closed on the opposition, rattled every team we played, driving them backwards, not giving them space, panicking them and quite often forcing a turn over. Loose balls were pounced on and recycled. Our runners were equally hard and aggressive going forward into opposition defences as they were in quickly spinning the ball wide and either exploiting gaps in the opposition defensive line or going around them in space created. We did not have a try scored against us all day and that is testament to their guts and ferocity of their tackling.

Mistakes were made, but heads did not drop nor remarks made except in encouragement and in the expectation of making amends. Our sportsmanship in all games also did us proud - the players recognised and congratulated the excellence and sportsmanship of all their opposition that day.

We do not typically name players individually in the report in particular this day when there were so many individual moments of brilliance and guts, and when the players genuinely played together as team. The most satisfying aspects are that we do not rely upon one or two individuals to win games for us as we have players that play together as a team; we have strength in depth whereby every player on the field complements the team in their own way; and that our players are making decisions on the field under pressure. And even better, we have as many chomping to get into the squad! Our whole squad has developed tremendously and we should be very very proud of all our players this season.

Having said we don’t… we shall! The Player of the tournament was chosen by the captain, Jakey Wood, as Rory Minton. He was fearless in the tackle, hunting down opposition that broke our line, in attacking the opposition line and supporting other players around the pitch.

I shall be tacky and end on a quote from the Crowborough organisers addressed to us as a Club - “the Chichester squads were superb to watch, a credit to your club”… and so they were!