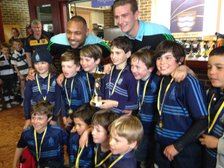 Under 9s win Worthing A Festival

Another season highlight - Harlequin players awarding our U9s with their trophy at Worthing!

Worthing Festival 26Apr15
We took a strong team to Worthing in full expectation of being the target of our fellow Sussex clubs, being the newly crowned Sussex champions… and so we were. We faced probably our toughest competition this season in Haywards Heath who we played in our last pool match of the day – but won 3-1.

We played the Hertfordshire raiders, Harpenden RFC, whom we did not know what to expect, but cruised to a reasonably easy win, but a good warm-up for us as we are traditionally slow starters. Next up was Pulborough 2’s who were no match for our squad in full flight. Our old foes Worthing were next and again were no match. The last group game was against the unbeaten Haywards Heath A’s, who gave us a very tough match with their very strong defending and hard attacking. We won 3-1.

All this great work put us into the final against the unbeaten Pulborough 1, who had defeated two very strong looking teams – Worthing and Sutton & Epsom. However, 3 superb tries from turn-over/broken play by Jakey Wood had them on the back foot… together with some, what can only be described as, devastating tackling by all the squad - in one instance tackling them from the kick-off back to within 10ft of their own line and in another instance tackling them back behind their own line with 3 or 4 tackles in the try area. 3-0 at half time became 7-1 by the final whistle in a superb open intelligent display.

Again to single individuals out of a superb performance is so hard, difficult and unfair – particularly as all tackled incredibly well. However…. A few notable moments from players that aren’t normally in the spotlight… Oscar de B was on the receiving end against HH of two crunching tackles and each time took them bravely and reset the ball perfectly to allow us to turn back-footed attack into front-footed attack. Sean S following in Jakey’s footsteps of breaking tackles of the defensive line and then using his speed to cruise through broken defence to score a try. William W scavenging on the deck like a terrier on loose ball.

And a surprise at prize giving - Harlequin players handing out the winner's medals!