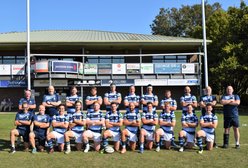 At the end of a truly memorable afternoon champagne was popped on the pitch as Chichester players and hundreds of their supporters celebrated promotion to National 3 [South]. The play-off had been tense and exciting with victory only emerging in the last quarter of the game. Chi had trailed 7-16 at the interval but fought back brilliantly to score 18 points without reply. Eton Manor were tough opponents and will be disappointed that they fell short at the final hurdle for the second time. They were sporting in defeat and joined in the raucous singing contest later in the clubhouse. Chi won by 4 tries, a conversion and penalty to 2 tries and 2 penalties. They deserved the prize after their 3 narrow misses and they will look forward to visiting new venues and the weekly challenge against very strong clubs.

Due to a colour clash they took the field in their change strip of red and light blue. Moses Kasujja ran on first as he was to play his last rugby game due to an arthiritic hip. He has been an outstanding No.8 and former captain for many seasons, and despite his modesty should be very proud of his achievements. He will be sorely missed. It was a bright day after previous rain and there was a gusty breeze. The touchlines and clubhouse were packed with supporters from both clubs urging on their favourites. Manor kicked off, Chi failed to gather and were soon penalised at a scrum in front of the posts. Fly half McKie slotted the kick easily. Richard Adams and Henry Anscombe put long touch kicks to the right corner for driving lineouts which Manor repelled and showed skill at the turnover. After they had been penalised for obstruction on the Manor throw, a maul towards the try line was killed by a flanker coming in at the side and he was given the first yellow card. Sam Renwick made a half break, the pack rucked, Adams dummied and shot through a gap, rounding for the try to made his own conversion easy 7-3. Manor hit back and handled well, winning a penalty just outside the Chi 22. McKie made it 7-6. Another infringement by Chi at the lineout and Manor attacked the left flank. They cleverly switched direction with an accurate high kick to the right wing and outside centre Mowbray went over. Conversion hit the post. 7-11. They pressed again helped by a wind-assisted bounce and right-winger Eghan was dangerous with great pace but running laterally instead of straight. Nick Blount was yellow carded at a lineout for pulling his opponent in the air but it seemed a harsh decision. Manor took advantage and the ball was transferred with good hands out to Eghan who had an overlap and only had to dot down for their second try at the corner, Conversion missed, but Manor now had the upper hand and they must have been confident with their lead at the break. 7-16.

Chi restarted still a man down but was in determined mood and attacked through the central channel with Renwick threatening but knocked back by a firm tackle. He and Jack Bentall were having quite a battle with their opposite numbers for supremacy. Manor missed a long penalty and in the only unsavoury incident in the game their open side flanker was lucky to escape with a yellow rather than red card when he punched Ben Polhill on the ground. Hooker Dane Gingell was throwing accurately and Phil Dickin set up a drive, which was held once more by a well-drilled defence. With Blount returned Chi went up a gear. They swarmed to Vultures corner and Gingell peeled off the maul to crash over on the blindside. Conversion missed, 12-16. An Adams chip over the top saw Bentall. Tom Belcher and Anscombe combining to give a chance but spoilt by a knock on. Manor counter attacked from a ruck but suffered the same fate. The Chi forwards were now in full stride and linking with the back line. They were focussed and hurtled to Vultures corner for another attempt. Lineout, drive, inter-passing and the onrushing Belcher broke through with ball in hand. He drew a tackler and fed the powerful Chris Johnson supporting down the touchline. A last tackle was made but Johnson went through it and crashed across. A great roar from the very vocal crowd saluted a well-worked try, clinically finished. Chi were ahead at last. Manor held firm as Chi turned the screw and another chance went begging due to a forward pass. Manor were tiring in the pack and Chi seized the moment, Bentall offloading to Renwick who made a scintillating outside break and raced 30 metres to score Chi's fourth try. Conversion hit the post, 22-16. Great noise from Chi supporters with only 5 minutes plus added time left and the need to put the game beyond Manor's reach. Chi attacked in force and won a penalty as Manor tried desperately to keep them out. Adams calmly stroked the ball through the uprights. The whistle blew after the dropout and Chi had done he job, final score 25-16.

Both teams had given everything and it had been a wonderful occasion. Congratulations to the squad, Director of Rugby Paul Colley and Head Coach Rob Lawrence for all the hard work which has brought due reward. Chi RFC is in good shape and the clubhouse will be extended and refurbished this summer.as befits a National 3 club. They would greatly appreciate all support next season with Chichester in the big time.

The game had everything with all the sweat and tears of many years culminating in a thrilling comeback. At half time the chips were down we had dominated possession but had not had the steel to get the crucial scores. Eton Manor were everything I imagined and more with tough abrasive forwards who were very well drilled and a set of backs that tackled hard and in attack did the simple things well - with a very strong running right wing they were a real threat. At half time we had to have a frank and honest discussion that the opposition wanted it more than us and that was simply not good enough - we would need to show some real heart if we were to come back - to a man they stepped up but in particular I looked into the faces of Ben Polhill and Moses Kasujja these Chichester warriors had been through thick and thin with me and epitomised the team spirit we have built here. We lifted the intensity and really started to play; harnessing fantastic ball the backs suddenly started to play the expansive game Rob has been working on and the four try tally highlighted our ability to play. When the final whistle went it felt almost surreal the pressure of making the right selection choices and preparing the side for the last few critical weeks of the season was immense - only now could I relax.

Eton Manor gave their all with real team spirit and it was an honour for Chichester RFC to play them - they brought fantastic support many of whom showed some traditional rugby values mixing and indeed singing in the bar afterwards.

It’s been an amazing season hard on the heels of three or four years of tremendous progress as this squad has slowly developed and matured. There were simply too many standouts to name and too many people to thank - perhaps I might take a few weeks to reflect and put in writing.
At this stage I simply feel pride; pride in job well done, pride in our players, our club, our supporters, our history - The observer asked them to be heroes and they delivered.