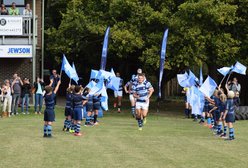 Blues hang on for a bonus point victory

There were debuts for Zac Conoly in the second row and Liam Rowland on the bench, with Ben Polhill starting his 23rd season in the 1st XV as blindside flanker. Ben Robson and Ben Deavall also returned to the side after lengthy absences with knee injuries.

Horsham kicked off up the slope and recovered the ball, but progress was slowed by the Chichester defence before an offside 30 metres out provided the visitors with their first points of the afternoon. 0 - 3 after 2 minutes. From the restart Chichester contained several phases of Horsham attack before turning the ball over. An infringement provided Blues with a penalty kick from 35 metres but the ball drifted just wide in the wind. From the drop out Chichester attacked down the slope with Charlie Wallace cutting through the visitor’s defence. The ball passed through several pairs of hands before Sam Renwick dotted down. Conversion missed. 5 - 3 and 7 minutes on the clock. For the next 5 minutes Horsham pressed in the Blue’s half and another penalty was conceded in front of the posts. 5 - 6. From the restart Chichester upped the tempo and made several sorties into the opposition red zone, before being repelled. Finally, a run from Renwick made 30 metres allowing the forwards to pick and go for the line, with Joe Woods crossing over for the second try. Converted. 12 - 6 after 20 minutes. Blues conceded another penalty 35 metres out which was stroked between the uprights. 12 - 9. Charlie Norton added 3 points with a drop goal from 25 metres out. 15 - 9 with 11 minutes to play in the first half. Chichester increased their lead further when a Horsham clearance was picked up by Norton and fed to Chris Johnson. The No. 8 charged through the opposition defence and offloaded to Rhys Thompson whose looping pass found Matt McLagan out wide to run it in and touch down in the corner. An excellent conversion from Norton. 22 - 9. Half time and Chichester seemingly in control.

Chichester came out in the second half looking to build on their lead. Inside 9 minutes an infringement allowed Norton to kick for the corner. A well worked lineout secured the ball and the pack drove forward and captain Wallace touched down for the bonus point try. Converted 29 - 9 and victory seemingly secured. However, Horsham hadn’t read the script and in the space of 10 minutes had cut through the Blues defensive line to score 2 tries, both converted by inside centre Johnson. 29 - 23 and 19 minutes left on the clock. With both teams starting to tire, and errors becoming more prevalent, the referee produced a yellow card and the visitors were reduced to 14 men. Chichester used their numerical advantage and Horsham were unable to stop Chris Johnson bulldozering his way over the whitewash to score try number five and provide some breathing room. Converted. 36 - 23 and 9 minutes left. From the restart the visitors secured the ball and the left winger scythed through the Chichester defence to score. Converted. 36 -30. Could Horsham snatch a victory at the death? Once again, the ball was passed out to the lightning quick left wing who outpaced and outflanked the Blues’ defence for a certain try but put a foot in to touch. With a minute left Horsham conceded a penalty and Norton slotted it between the posts to secure victory and 5 points. Full time and 39 - 30.
Both management teams will draw positives from this first match of the season. It was particularly encouraging to Ben Robson and Ben Deavall back playing rugby. The return match is the season finale in 32 weeks time!

The supporter’s man of the match was Chris Johnson.

Next Saturday Chichester make the short journey down the A27 to take on local rivals Havant. Kick-off is at 15:00.