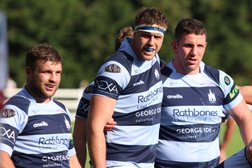 Havant regain the A27 bragging rights

Chichester made 6 changes to the side that beat Horsham in the first match of the new season. Nick Blount and Jon Lindsay came into the pack, with Harry Seaman in the backs and Richard Ives, Josh Cameron and Tom Blewitt on the bench.

The Chichester team had made the short journey down the A27 on Tuesday night to practice on the 4G pitch and were hoping to replicate their famous win earlier in the year. Havant had opened their clubhouse extension before the match and a large, vocal crowd filled the stand and spilled round both sides of the pitch in warm and sunny conditions.

Havant kicked off and immediately had Blues under pressure. A penalty was conceded for holding on just inside the 22 metre line. A simple kick. 3 - 0 and only 2 minutes on the clock. From the restart the home team were penalised providing Blues the chance to respond immediately. The kick had the length but the deceptive wind pulled the ball wide. From the drop out Havant advanced into the Chichester half and laid siege for 10 minutes before finally penetrating the Blues defence in the corner. An excellent conversion from the touchline. 10 - 0 and 14 minutes gone. At the end of a period of sloppy play, where both teams were struggling to pass the ball to hands, Blues had a scrum on their 10 metre line. Josh Goodwin spun the ball out to Shaun Baker which then passed through the hands of Rhys Thompson, Charlie Norton, Matt McLagan, Harry Seaman and finally to Charlie Wallace for a try under the posts. Converted. 10 - 7 and a quarter of the game gone. The Havant response was instant and over the next 9 minutes they scored 3 tries, 2 of which were converted, to lead 29 -7 with 11 minutes still left until half time. The half was rounded off by a 50m solo run from the Havant centre who out flanked the Blues’ defence to score their 5 try. Conversion missed. Half time. 34 - 7 and the Chichester faithful concerned about shipping 80 points before the end of the day.

Havant came out after half time and immediately had Blues under the cosh with a converted try. 41 - 7 and 42 minutes on the clock. Something then happened and Chichester stepped up several gears, making tackles and pressuring the home side into mistakes. Havant found themselves pinned in their red zone and managed to hold the ball up as the Blues’ pack drove over the line. From the subsequent scrum Seaman fed Thompson who wrong footed the defence to dot down. The conversion rebounded off the post. 34 - 12. As the half progressed Chichester’s confidence grew and the Havant running game, so effective in the first half, was thwarted. At one point Tom Blewitt recovered a loose ball on the Blues’ try line and ran it out of defence! Under constant pressure the Havant penalty count was rising and finally the referee produced a yellow card. Blues used their man advantage to pin Havant back in their red zone for nearly 10 minutes. The Chichester lineout was functioning well but the Havant defence was stifling the Blues’ driving maul. Finally a breakthrough as the pack crossed the line and Richard Ives touched down for the third try. Converted from out wide by Charlie Norton. 41 - 19 with 11 minutes left and the Chichester supporters hoping for a 4th try to salvage a bonus point. They were nearly rewarded when a ball out wide found Dane Gingell in space 10 metres from the line. However, the pass was deemed forward and play was called back. As the clock ran down Blues were back defending inside their 22 metre line as Havant looked to increase the score. 4 minutes from time Chichester were reduced to 14 players when the referee produced a yellow card but they hung on. Final score 41 -19.