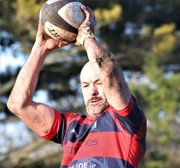 Blues give the league leaders a scare in a very tight finish!

After a couple of very wet couple of weeks Chichester headed north to play league leaders Westcombe Park, with the weather breaking just in time to make the game playable.

Blues had a challenging week with training disrupted by the weather and 7 changes to the team that beat London Cornish by a point last time out. Materati Waqanisau made his debut in the pack, Cam Hopkins, Rhys Thompson and Taff Davies returned in the backs with Baz Magda, Cam McKenzie-Lowrie and debutant Pete Farrow on the bench.

Chichester started strongly and Combe spent much of the first 20 minutes pinned back behind their 22 metre line. As the half progressed the home side responded with their backs looking extremely dangerous. A Blues’ interception prevented a certain try but Coombe got themselves on the scoreboard after 25 minutes with a chip over the top that was collected and touched down in the corner. Conversion missed. 4 minutes later Coombe stole the ball at the lineout and it found its way out to Dan Hamilton who scored by the posts. Converted. 12 - 0. A number of Coombe infringements, after a series of pick and goes, gave Taff Davies the opportunity to put 3 points on the scoreboard as the clock ticked down. However, the last 6 minutes were full of action and Hamilton went over again for Coombe’s 3rd try. Converted. 19 - 3 and 37 minutes gone. Chichester made 2 substitutions and the home side were reduced to 14 men when the referee produced a yellow card. From the subsequent lineout the ball was passed to Rhys Thompson who broke through the Coombe defence with a lovely angled run to score. Converted. 19 - 10. Half time and Chichester back in the game.

The half time talk seemed to galvanise the Blues who tore into Coombe using their numerical advantage in a series of lineouts and drives by the forwards. Pete Farrow dived over from short range after 45 minutes to score Chichester’s 2nd try and Taff Davies’s conversion bounced over off the cross bar. 19 - 17. 5 minutes later Blues used the same play but this time it was Harry Seaman who darted across the line to score. Conversion missed. 19 - 22 and Chichester now in the lead but this was short lived. The referee produced his yellow card and this time it was Blues' turn to lose a man. On 54 minutes Dan Hamilton crossed the whitewash again for his hat trick (and 8th try in 2 matches). Converted. 26 - 22. With 15 minutes left Coombe scored another converted try and extended their lead. 33 - 22. However, as London Cornish can testify, Chichester don’t give up easily and put the home team under pressure, conceding a penalty. Blues kicked for the corner and from the lineout drove across the line with Joe Woods touching down for the bonus point try. An excellent conversion from Taff Davies out wide reduced the deficit. 33 - 29 and 5 minutes left. Coombe came back with the kitchen sink but Blues’ defence held firm. One final chance to secure a last gasp victory was snuffed out and the referee blew for full time to end a pulsating and entertaining game that saw the league leaders tested and Chichester leave Kent with 2 bonus points for their efforts.

Paul Colley, Director of Rugby - “Today highlighted the progression we have made in recent weeks and whilst we are disappointed to lose we pushed a good side very close.”

Man of the match was birthday boy Ben Polhill who exemplified everything that is Chichester.