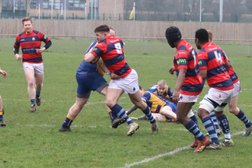 A below par performance from Blues!

Having run league leaders Westcombe Park close, last time out, Blues made the long trip north again to play bottom of the league Beckenham. Having been delayed in the south London traffic the team only arrived an hour before kick off.

Chichester made 6 changes to the team that secured 2 bonus points away to Westcombe Park. Josh Cameron and Chris Johnson came into the pack, Matt McLagan, Tom Blewitt and Toby Golds returned in the backs with Ben Deavall on the bench. Joe Woods made his 100th 1st XV appearance.

Despite the poor weather of previous weeks the pitch was in remarkably good condition with a large and vocal home support looking forward to an entertaining game of rugby.

Beckenham kicked off and a knock on put Chichester under immediate pressure on their 22 metre line. Having cleared the danger it was the home team who were first on the scoreboard, with a penalty kick, from 25 metres, after a Blues’ infringement. 3 - 0 and 5 minutes on the clock. Beckenham doubled their lead on 13 minutes with a second penalty kick. 6 - 0. Despite playing in the opposition half for long periods Chichester were being dominated in the scrum and couldn’t find a way through a determined Beckenham defence. Several moves close to the try line were halted by knock ons and turn overs. Blues finally got on the scoreboard after 24 minutes, after the home team infringed within kicking distance. 6 - 3. The Beckenham response was almost immediate and a well worked move from their backs saw the left winger breeze through the Blues’ defence to score under the posts. Converted. 13 - 3.

As the referee blew for half time the Chichester supporters reflected on missed chances and whether keeping the scoreboard ticking over would have been a better option than going for tries.

Both sides came out of the traps looking to stamp their authority on the game but play was scrappy and neither team could retain the ball . On 52 minutes the referee produced a yellow card and Beckenham lost a man to the sin bin. With the numerical advantage Blues made progress up the pitch and went through a series of pick and goes on the opposition 5 metre line before losing the ball. A Nick Blount pass found Rhys Thompson whose offload created the overlap for Tyrese Makasi to race clear, but the referee adjudged the pass to be forward. On 68 minutes a Thompson chip over the top ricocheted off a defender and Thompson was on hand to hoof it down the pitch. Liam Rowland won the foot race to touch down. 13 - 8. With the clock ticking down Chichester conceded another penalty within kicking range and Beckenham increased their lead. 16 - 8 and 5 minutes to go. However, Blues weren’t going to go down without a fight and as they raised the tempo the home side started to concede penalties. In the final 5 minutes Beckenham had another player sent to the sin bin and conceded 2 penalties in kicking distance. Unfortunately, neither kick was successful and the match ended 16 - 8.

Chichester’s next match is on Saturday, 1st of February when they welcome the Honorable Artillery Company to Oaklands Park. Kick-off is at 14:00.