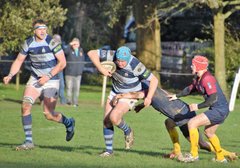 A hard and close game on a pleasant afternoon at Oaklands Park. Chichester just about deserved the win but the visitors were up for it and stretched the Blues. It was the first league match at Chichester for the Honorable Artillery Company and they gave a good account of themselves despite their modest league position. As they warmed up on a soft pitch, a couple of big guns in their pack were noted. In summary, after being under the cosh for 20 minutes during the first half, Chi raised their game and went 8 - 0 ahead after the interval, only for HAC to reply with a converted try. The last minutes were tense.

Chi were forced to make changes from their last game. John Lindsay was at lock and Ryan Spriggs in the back row. Fijian soldier Matereti Waganisau made his home debut at No.8. Gareth Davies moved to fly half and Toby Golds to the right wing. On the bench Ben Robson returned from injury and Mark Giddings was welcomed back after long absence.

Chi started well and for 10 minutes looked sharp with good handing phases into the enemy 22. But the Artillery boys then went into action and besieged Chi’s fortress. They pounded away but Chi were angry tigers in defence and the covering and tackling were excellent. Matt McLagan did have to save the day when he dramatically caught up and nailed an opponent as he was about to score at the posts. They finally conceded penalties and a yellow card in the red zone and after failing to get over the line, HAC opted to take one but missed badly. Chi broke out after their 7 man pack heaved and won a scrum. They threatened to score for the first time but mistakes undid them and a counter by HAC resulted in a rolling ball over the Chi try line which was hastily touched down for a drop out. A good sign for Chi was some penetration by Rhys Thompson and McLagan, but half time arrived without the scoreboard being troubled.

Chi had their pep talk and raised their game. Nick Blount soared in the lineout and the maul got going. Lindsay broke off from a scrum and made ground. The pack turned the screw and after several thrusts to the line were just held, Tom Blewitt kicked a penalty. A very high kick by Thompson led to a scrum and quick ball out to the backs. Slick hands made the gap for McLagan to beat a despairing tackle and dive across at the Vultures Corner flag. Difficult conversion missed, 8 - 0. A huge line kick by Blewitt, Blount feed, and Shaun Baker was almost over but for a knock on. Davies made a half break on the right flank followed by a full break by Robson who was unlucky with his offload. HAC hit back and after several well controlled phases, they put their powerful prop over at the posts. Converted, 8 - 7.

Thompson broke through again to feed McLagan again but he was tackled short of the right corner. The HAC captain now urged his troops to win the day and they tried hard. They lost a good position due to a forward pass and Chi were relieved to win a penalty at a scrum which enabled them to clear the danger. They won a long range penalty in the last minute and decided to take it, but it drifted wide. They held on for the last seconds. So 4 league points gained and a total of 50 for the season means a solid 8th place out of 14. This was their 4th one point home victory in a season, believed to be the club all time record!

Man of the Match was Ben Deavall.