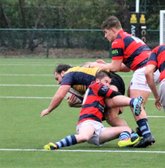 With Storm Dennis sweeping across the United Kingdom, Blues made the trip up the A3 to play Cobham on their 4G pitch.

Chichester made 9 changes to the team that beat HAC by a single point, in a low scoring game, last time out. Pete Farrow, Joe Woods and Charlie Wallace came into the pack, Harry Seaman, Tom Knight and Tim Cook returned in the backs with Richard Ives, Jack Knight and Kyle Armstrong on the bench.

In persistent rain, and with a gusting wind blowing down the pitch, Cobham kicked off with the wind behind them. It was Chichester who were first on the scoreboard with a Tom Blewitt penalty kick from 30 metres, after a Cobham infringement. Blues doubled the score on 12 minutes with a second Blewitt penalty kick. 0 - 6. Despite playing into the wind, Chichester were enjoying the lion’s share of possession and a quarter of an hour had gone before the home side crossed the half way line with the ball. On 18 minutes it was Blues turn to infringe and with wind assistance Cobham were on the scoreboard. 3 - 6. A Cobham infringement allowed Blues to kick for touch in the corner and from the lineout on the 5 metre line the forwards inched the ball forward with a series of pick and goes. Gareth Davies deftly chipped a ball over the defence but it was a Cobham hand that applied the downward pressure in the ensuing scramble, for a 22 metre dropout. On the half hour mark the home side levelled the scores with their second penalty kick. 3 minutes later a well timed pass on halfway split the Chichester defence and Cobham were through for a converted try. 13 - 6. With a couple of minutes left in the first half the referee produced a yellow card and Blues were down to 14 men. Cobham increased their lead by 3 more points with a successful penalty kick. In the dying moments Chichester moved the ball out wide through Harry Seaman, Charlie Wallace, Pete Farrow and Nick Blount. Blount’s long pass found Davies who was forced into touch just short.

16 - 6 and half time. The small contingent of Blues’ fans were pleased with the first half performance which saw Chichester dominate for significant periods in challenging conditions.

Despite being a man short Chichester repelled all opposition advances, at the start of the second half, and looked dominant in the scrum. 11 minutes into the second half the referee produced the yellow card again, reducing Cobham to 14 players. With the numerical advantage Blues advanced into the opposition red zone and won a penalty which was kicked to the corner. From the lineout Chichester’s pack moved the ball forward with a series of pick and goes but it was Rhys Thompson who darted over the line to touch down. The referee disallowed the try and took play back for an earlier infringement. Blues opted for the 5 metre scrum and drove Cobham back over the try line, allowing Baz Magda to dot down. Conversion missed. 16 - 11 and 61 minutes gone. Cobham increased their lead to 19 - 11 with a penalty kick 4 minutes later and started to stamp their authority on the game. Their wingers and full back were up quickly, seemingly winning every lofted ball, whilst the fly half was screwing low balls in to touch keeping Blues penned in their own half. With less than 10 minutes left Cobham increased their lead to 22 - 11 but Chichester weren’t ready to concede defeat. Blues’ pressure resulted in another penalty, kicked to the corner for a lineout. Nick Blount secured the ball and the pack drove for the line before being stopped illegally. The referee signalled a penalty try and produced the yellow card, reducing the opposition to 14 players for the second time in the match. 22 - 18 with 3 minutes left. Could Blues snatch victory? From the restart Chichester conceded a penalty 8 metres from their try line and expecting Cobham to kick the penalty were caught out by a quick tap by the scrum half who dotted down. An excellent conversion from out wide into the wind. 29 - 18 and full time.

Chichester’s next match is on Saturday, 22nd of February when they welcome Medway to Oaklands Park. Kick-off is at 14:30.