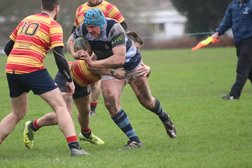 Blues hang on for the draw!

After a late morning squall, the weather cleared with the sun making a brief appearance during the warm up and, despite the recent poor weather, the pitch was surprisingly firm under foot.

Chichester made 8 changes to the team that lost away at Cobham, last time out. Martin O’Callaghan, Zac Conoly and Chris Johnson came into the pack, Josh Goodwin, Cam Hopkins and Toby Golds returned in the backs with Sam Drayson and Ryan Spriggs on the bench.

Chichester kicked off up the slope with the with the wind behind them. Great work from Chris Johnson secured the ball and a drive from Martin O’Callaghan moved the ball deep into Medway territory. From the ruck Josh Goodwin fed Rhys Thompson, running a diagonal line through the opposition defence, and his pass to Tyrese Makasi beat the last defender allowing the young hooker to dive over in Vulture’s Corner. Conversion missed. 5 - 0 and less than 2 minutes played. It didn’t take Medway long to respond and, with their large and experienced pack dominating the breakdown and scrum, they had scored 2 converted tries with 15 minutes on the clock. Chichester fought back and on 23 minutes had advanced to the opposition’s 5 metre line. An infringement in the breakdown saw the referee reach for a yellow card and reduce Medway to 14 men. Blues kicked for the corner, and from the lineout proceeded to move the ball towards the try line with a series of pick and goes. Medway were penalised for 2 further infringements and it was 3rd time lucky for Chichester when the maul crossed the line, after a great drive from the pack, allowing Charlie Wallace to dot down. Conversion missed. 10 - 14 and 27 minutes played. 3 minutes later a long kick from Thompson, to the Medway try line, was chased down by Cam Hopkins and the pressured clearance kick went straight to Tom Blewitt who set off on a run. His offload found Martin O’Callaghan who charged over the line, close to the posts, for a try on his 100th appearance for the 1st XV. Converted by Blewitt. 17 - 14. In the last 10 minutes of the first half Chichester thought they had scored a 4th try. A Goodwin interception and another O’Callaghan drive, supported by Joe Woods, saw Nick Blount cross the line but the referee penalised Blues for an infringement.

Within 2 minutes of the restart Medway had drawn level with a long range, wind assisted penalty kick after a Chichester infringement. For the first 20 minutes of the second half Blues enjoyed the lion’s share of possession and had the visitors penned back in their own half. Several opportunities to score were foiled by a well drilled Medway defence. The referee produced his yellow card on 57 minutes and the opposition were again reduced to 14 men, but Chichester couldn’t exploit the advantage. With 10 minutes left Toby Golds kicked the ball down the pitch and ran through to collect it. The ball was worked back across the pitch through the hands of Harry Seaman, Thompson and Liam Rowland to Sam Drayson who made 20 metres before being brought down by 2 defenders. Toby Golds was on hand to receive the offload and dive over in the corner for Chichester’s 4th try and a bonus point. Conversion missed. 22 - 17. Going behind seemed to spur Medway on and Blues spent the remainder of the match defending their try line. On 85 minutes, and with 3 Chichester players in the sin bin, Medway finally breached the Blues’ defence and crossed the whitewash. The conversion struck the post and the match ended in a draw - on balance a fair result!

Full time and 22 - 22, with Blues picking up 3 points and now unbeaten at home in nearly 5 months.

Man of the match was Ben Deavall.

Chichester’s next match is on Saturday, 29th of February when they travel north to Kent to play Dartfordians. Kick-off is at 14:30.